This gentle comedy from NBC was set in the working-class (and fictional) Richard Allen Holmes High School in Los Angeles.

Backed by triple Emmy wins for his work on I Spy, Cosby executive-produced The Bill Cosby Show himself, independently.

He engaged with the realities of the immediate post-Civil Rights era and apparently annoyed the network enough to trigger a premature cancellation.

Two regular weekly sketches appeared on that show – The Wife Of The Week and The Dude, with Cosby playing a character so cool nothing ever seemed to bother him. 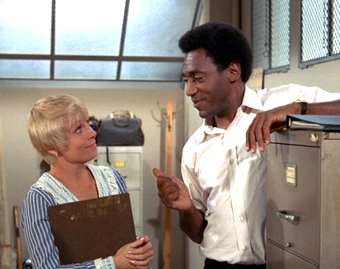 Cosby went on to stellar fame and success in the 1980s with the audience-friendly family sitcom The Cosby Show.

Cosby fell from grace in the mid-2010s when more than 60 women accused him of rape, drug-facilitated sexual assault, sexual battery, child sexual abuse, and sexual misconduct, dating back decades.

He denied the accusations – for which the statute of limitations had expired in nearly all cases – but was found guilty of three counts of aggravated indecent assault in April 2018, and sentenced to three to ten years in prison on 25 September 2018.