David Callan was an agent who worked for British Secret Intelligence. He was, however, a far cry from the glamorous world of James Bond. Played by the tough and rugged Edward Woodward, Callan was a killer, but a reluctant one. 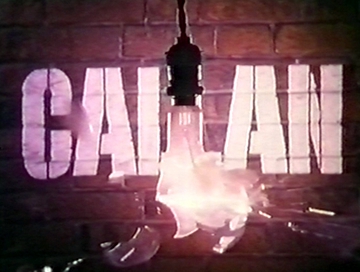 He had been prematurely retired at the age of 35 to become a clerk, because of a tendency to question orders and to show clemency to the targets assigned him.

Callan was an outsider and often in direct conflict with his superior, Hunter – not a specific person, but a codename given to all Section Heads. But then again, these were the anti-establishment days of the late sixties. And this was a violent, bleak world where you killed first or were killed.

The character of Callan was first seen in a one-off 1967 Armchair Theatre play on TV called A Magnum for Schneider where a disgraced former top agent was given a chance to redeem himself with one last liquidation. The hitman proved so successful that a series was commissioned.

At the same time, though, he protected his little accomplice, finding him a job as driver of the communications car, a taxi filled with high-tech listening devices. 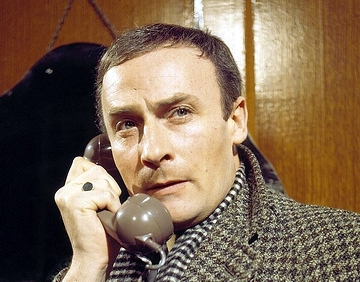 Other notable characters were fellow agents and rivals, the resentful Meres and the trigger-happy Cross.

Standout episodes were ‘Goodbye Nobby Clarke’ (with Michael Robbins from On The Buses as a former mentor turned mercenary), ‘The Death of Robert Lee’, ‘The Running Dog’ (about a Neo-Fascist party), and ‘Death of a Hunter’.

During the course of his “come-back”, Callan was involved in a number of different scenarios, many of them fairly typical spy fare. Some of his duties included: Handing an ex-SS officer over to the Israelis, stopping mercenaries, assisting the CIA in assassination plots, protecting defectors from the KGB and rescuing scientists from Communist East Germany.

As one could expect for the era, many of Callan’s activities were against the KGB, The Russians in general or Communists from Eastern-Bloc Europe.

Callan was certainly a product of the Cold War (in ‘Breakout’ Callan and Cross have to break a Russian spy out of jail in order to kill him).

And yet David Callan often showed signs of respecting (or heaven forbid, even liking) his Soviet counterparts.

Woodward and Hunter reprised their roles for the feature film Callan (1973) based on the pilot episode, A Magnum for Schneider.

Another one-off episode was released in 1981, called Wet Job, where Callan is running a militaria shop when he is forced back to work once again. Lonely, meanwhile, is running a company called ‘Fresh and Fragrant Bathroom Installations’, which was about as likely as Cilla Black running elocution classes . . .

Edward Woodward subsequently starred as an ex-secret agent in the New York-based The Equalizer (1985 – 1989).

TRIVIA
Due to events including a late Peter Osgood equaliser in the 1970 Cup Final replay and the General Election, the last six episodes of the third season were subject to numerous changes of broadcast date. The intended order was ‘Act of Kindness’, ‘Suddenly – At Home’, ‘A Village Called “G”‘, ‘Amos Green Must Live’, ‘God Help Your Friends’, and ‘Breakout’.

A Magnum for Schneider | The Good Ones Are All Dead | Goodbye Nobby Clarke | The Death of Robert E. Lee | Goodness Burns Too Bright | But He’s a Lord, Mr Callan | You Should Have Got Here Sooner | Red Knight, White Knight | The Most Promising Girl of Her Year | You’re Under Starter’s Orders | The Little Bits and Pieces of Love | Let’s Kill Everybody | Heir Apparent | Land of Light and Peace | Blackmailers Should be Discouraged | Death of a Friend | Jack-on-Top | Once a Big Man, Always a Big Man | The Running Dog | The Worst Soldier I Ever Saw | Nice People Die at Home | Death of a Hunter | Where Else Could I Go? | Summoned to Appear | The Same Trick Twice | A Village Called “G” | Suddenly – At Home | Act of Kindness | God Help Your Friends | Breakout | Amos Green Must Live | That’ll Be the Day | Call Me Sir! | First Refusal | Rules of the Game | If He Can, So Could I | None of Your Business | Charlie Says It’s Goodbye | I Never Wanted the Job | The Carrier | The Contract | The Richmond File: Call Me Enemy | The Richmond File: Do You Recognize the Woman? | The Richmond File: A Man Like Me

1 9 7 9 (UK) 13 x 60 minute episodes David Attenborough travelled the globe in order to trace the story of the evolution of life on the planet...

1 9 7 2 (UK) 12 x episodes The Strauss Family was ATV's enchanting twelve-part drama about the private lives of the father and son composers of 19th-century Vienna. The...

1 9 8 1 (USA) 13 x 30 minute episodes This animated series from Hanna-Barbera aired for one season on CBS. The Trollkins were a race of green,...