Crossroads was created by Lew Grade’s ATV company and was only scheduled to run for 13 weeks.

It began life as a late afternoon series (we didn’t call them soap operas in the sixties) set in the fictitious King’s Oak Crossroads Motel, somewhere in the West Midlands. 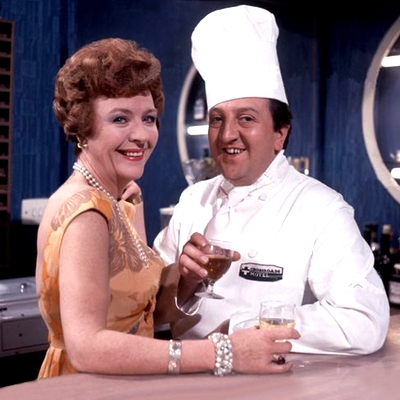 The series originally centred around the character of flame-haired widow, Meg Richardson, the Motel owner (played by Noele Gordon).

The show was pretty standard fare about life in a halfway-house motel (ATV originally titled the show The Midland Road) and was written by Hazel Adair and Peter Ling, the team behind previous BBC soapie Compact. It became the Midlands rival to Coronation Street.

The immortal first words (which rank up there with “to be or not to be” in terms of literary importance) were “Crossroads Motel. Can I help you?”. They were spoken by Meg’s daughter, Jill, and was just about the only sensible thing she ever said!

Jill was married three times (once bigamously), had two miscarriages, had a child by her stepbrother, became a drug addict, an alcoholic, and for good measure suffered a couple of nervous breakdowns.

Not that Meg fared much better – Her first husband, Malcolm Ryder, tried to poison her, she was imprisoned for dangerous driving, suffered amnesia, and when she thought she’d found happiness by marrying businessman Hugh Mortimer, he was kidnapped by a gang of international terrorists, with whom her partner’s son was involved, and died of a heart attack.

When the motel burnt down, everyone assumed that Meg had gone up in flames with it, but she’d actually booked a luxury berth on the QE2, and was sailing off to start a new life ‘Down Under’ . . . and so founding character Meg Richardson was written out of the show in 1981.

The motel then went through a succession of new owners – David Hunter, Nicola Freeman – played by the scrumptious Gabrielle Drake – and Tommy Lancaster, until finally the motel was taken over by Nicola’s stepson, Daniel Freeman leaving the last original character, Jill, to zoom off in a sports car to new horizons with John Maddingham.

Probably the best-loved of all Crossroads characters though was the slow-witted, woolly-hatted Benny Hawkins, first seen as a labourer at Diane’s uncle’s farm.

He followed “Miss Diane” back to King’s Oak, but continued to suffer more than his fair share of misfortune, including the death of his gypsy girlfriend, Maureen Flynn, on their wedding day.

The cosy antics of the characters, along with the rather hurried production, became the butt of endless jokes, with comedians in the 1970s cracking jokes about Crossroads actors who were sacked for remembering their lines!

Critics poked fun at its low-cost production and melodramatic storylines. Characters would vanish without trace and no-one would notice. In 1967, the coffee bar manager went to get some sugar and was never seen again. Later, odd-job man Benny Hawkins nipped out to fetch a spanner and he failed to return for over a year.

For all the criticism over the years, it would be unfair to say Crossroads failed – it ran for 24 years. In that time it tackled many difficult subjects: alcoholism (regularly), test-tube pregnancies, bigamy, rape, abortion, Downs syndrome, mental handicap, physical handicap (Sandy Richardson was soap’s first paraplegic), adopted children and racism (Joe McDonald was one of the first black characters to become a soap regular).

So why did it finish? There is no doubt that the axing of Meg was the beginning of the end. Her exit alienated its loyal fans.

The famous theme music (probably second only to the Coronation Street theme for recognition value in England) was provided by Tony Hatch and Jackie Trent and a smashing rearranged version of it was recorded by Paul McCartney and Wings on their Venus and Mars album. Criminally, a new theme tune was introduced in 1987 under producer William Smethurst.

After 4,510 episodes, the plug was pulled in April 1988, when Jill and Adam Chance sold up and drove off to start a new life in the West Country.

Crossroads was revived as a daily serial (which bears no resemblance to the original) by ITV in 2001.

1 9 6 9 (Australia) 26 x 60 minute episodes Riptide was an Australian-made action-adventure series with American Ty Hardin as sailor Moss Andrews (and a predominantly British camera crew). The show was shot on film with an eye...