Between 1965 and 1974 The Dean Martin Show was a weekly (Thursday night) fixture on NBC and his Dean Martin Presents musical-variety summer shows were hits for the network from 1968-73.

The hallmark of the show was Dean Martin‘s easy informality, as he welcomed guests into his cosy living room and clowned around beside Ken Lane’s grand piano.

“When the idea was brought to me, I thought it was so crazy that I made a farce of it,” Martin said of his TV career in 1966. 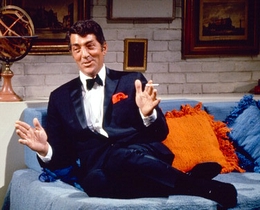 “Then I said I wanted to own the package 100 percent after the first showing of the series. I also said I wanted to work Sunday only, and I reserved the right not to sing on the show if I didn’t want to. What I asked should have been thrown back into my face, but the network accepted it – and it was lucky for me, because the show has done wonderful things for my records and it has given me a recognition that one doesn’t get from movies”.

A stipulation in Dean’s contract helped foster the air of informality on the show, by allowing Dean not to show up until the day of taping each week, when the show would be done with only minimal rehearsal.

A bevy of pretty young dancers called The Golddiggers (pictured below) were added to the show as regulars in 1967, and four of these later became the Ding-a-ling Sisters. In 1973 the title and format were changed, as well as the time slot.

The new title was The Dean Martin Comedy Hour, and Dean and Ken Lane were once again the only regulars.

Two new features were added. The first was a country music spot, with top name country performers. The second was the Man of the Week Celebrity Roast, in which several celebrities seated on a dais at a banquet tossed comic insults at the guest of honour.

This feature proved so popular that after Dean’s regular series ended in 1974, the roasts continued on NBC as a series of occasional specials. Born Dino Crocetti, Dean dropped out of school in ninth grade to work as a drugstore clerk, gas jockey, coal miner, $25-a-match boxer and blackjack dealer before moving into singing, changing his name to Dino Martini and ultimately Dean Martin.

He sang his way around the club circuit before teaming up with Jerry Lewis to do comedy on stage and in movies.

Their break-up was legendary (“I hated being a dumb stooge,” Martin said afterward) and from there Martin teetered on the precipice of career failure after his first solo film, Ten Thousand Bedrooms, bombed. But a huge pay cut and a role as a draft dodger alongside Marlon Brando and Montgomery Clift in The Young Lions (1958) put him right back in it.

He became so successful as a singer, actor, Las Vegas performer and key member of Frank Sinatra‘s Rat Pack that many questioned why he’d bother weighing himself down with a regular TV show.

According to Martin himself, who was backed up by many who knew him at the time, the whole point of his act was to behave like a drunk. What you saw on his show much of the time was a glass of apple juice.

Martin silenced his critics by asking; “How could a drunk get up at six o’clock in the morning, play nine holes of golf and then spend the rest of the day working on a show he’s never even seen before, with music cues, tricky arrangements and all the rest of it?”.