DoDo the Kid from Outer Space

As the title suggests, young DoDo was a child who came from outer space, specifically the “atomic” planet Hena Hydro.

Dodo, the “science fiction pixie from a strange atomic race” with “propellers on his heels and antennas on his ears” appeared in 78 five-minute episodes with his companion, Compy the Computer Bird.

Along the way, they joined the circus, bought a space pig, went to the opera, visited Japan, and had many other adventures. 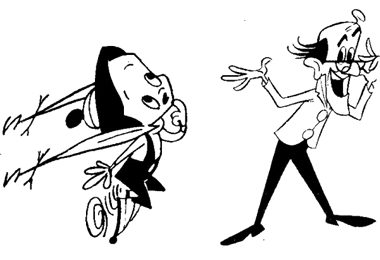 Usually tagging along was Professor Fingers, one of the Earth’s foremost researchers – and also one of the most narcissistic, jealous, unpleasant people you might ever meet in a children’s cartoon.

The series was written by American Lady Robinson with financial backing by Robert Maxwell of all people, produced in full colour by the British cartoon company Halas & Batchelor, the same animators who brought George Orwell’s Animal Farm to life in 1954.

In many ways, the series resembled such Japanese cartoons as The Amazing Three, an animation style that was very popular at the time.

Released into syndication in 1965, the show gained its greatest US exposure during a three-year run on Saturday mornings with many NBC affiliates, from 1966 to 1969.

Part of the series was eventually screened in Britain in 1972.