I wish I was a spaceman, the fastest guy alive
I’d fly you ’round the universe in Fireball XL5

Fireball XL5 is one of a fleet of ‘XL’ spacecraft of the World Space Patrol, a world space agency of the 21st Century in a world where man has explored space extensively and made contact with alien civilizations. 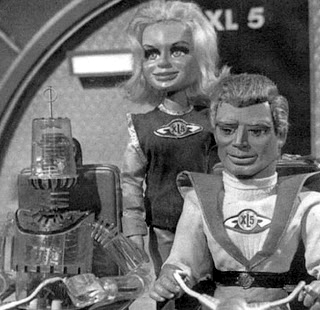 The series of 39 episodes related the interplanetary adventures of the crew of the Fireball XL5, patrolling Sector 25 of the galaxy in the year 2062.

Each week Fireball XL5 would explore exotic alien planets, patrol the space ways and protect the innocent from intergalactic villains such as Mr and Mrs Space Spy.

There was still the occasional juvenile style episode – for example, ‘1875’ where the XL5 crew are sent back in time to the Wild West where Steve Zodiac (the handsome XL5 pilot) becomes a sheriff and Venus (the crew’s medical expert and Steve’s romantic interest) becomes an outlaw – but generally the stories were exciting and relatively mature.

Fireball XL5 is a long, sleek spacecraft, with one main nozzle engine at the back and two smaller rockets fitted to each of the wing fins. Running almost the entire length of the spacecraft is a tail fin. Seven windows run along each side of the fuselage, stopping just at the beginning of the tail fin. On top of Fireball XL5 is a glass observation dome. 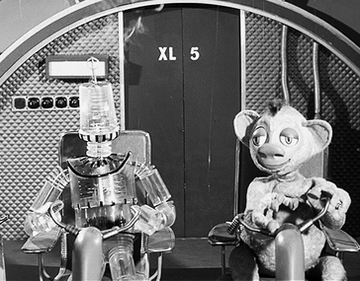 Fireball XL5 is split into two parts, the main section as described above and then a smaller section which contains the control cabin and is called Fireball Junior.

It has large windows at the front, which run along part of the side, giving a wide area of view, and four fins which run nearly the entire length of it, which enable it to fly to any planets with an atmosphere.

Fireball Junior also acts as a landing vehicle. It detaches from the main body of Fireball XL5 and lands on planets using rockets and landing legs, while the main part of the spacecraft remains in orbit.

Control of the spacecraft is by handlebar-like control columns, one to each pilot – Steve Zodiac and Robert the Robot (Steve’s transparent mechanical co-pilot).

The front of the control cabin is a metal framework, covered in glass – although in the puppet set of the cabin there is obviously no glass (you can see the strings).

The main body of Fireball XL5 contains a navigation bay, where Professor Matt Matic (XL5’s bespectacled navigator and scientific officer) plots courses with equipment including a radarscope (like conventional earth radar) and an Astroscope, which provides the spacecraft with pictures of the area they are searching. 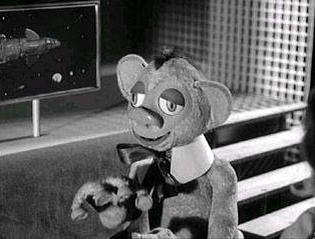 Matt Matic (geddit?) also has a Spacemascope, which again gives pictures of the area.

One other device used by both the crew of Fireball XL5 and other craft is the neutronic transmitting system, a radio system for use in space.

Aside from the navigation bay, Fireball XL5 also has a lounge, accommodation for the crew, a laboratory for Venus (and Zoonie, her pet Lazoon), a Space Gyro Room, and a Space Jail.

There are four other important pieces of equipment. First, there are the ray guns with capsules of energy. Second are the thrust packs, which strap to the crew’s backs, which enable them to manoeuvre in space.

Third are their jetmobiles (pictured). These are like motorcycles but are used in space and on land. They hover on jets (hence the name). 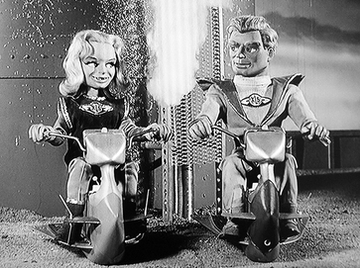 Finally, there are the oxygen pills. These enable the crew to go into space without oxygen and without the need for spacesuits.

On return to Space City, Fireball XL5 uses retro-rockets to land vertically, landing on a pad where crane cradles pick it up and move it back onto the launch ramp, ready for takeoff again. 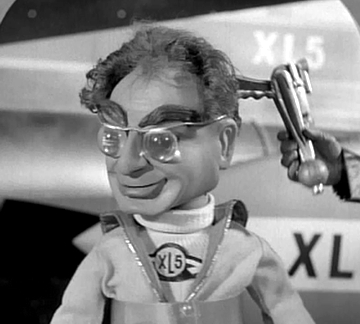 The head of Space City is Commander Zero. He coordinates all XL5’s missions with the aid of Lieutenant Ninety, a Scottish engineer named Jock, and his son Jonathan Zero.

Fireball XL5 established a style which Gerry Anderson refined and improved in each of his Supermarionation series’.

The next step was to move into a wider market, and that meant the United States – and colour (with Stingray).

Gerry Anderson had originally intended to call the series Nova X 100, but the name was changed during pre-production, a move apparently inspired by Castrol XL motor oil.