This ABC comedy series followed the adventures of Sister Bertrille (once plain old Elsie Ethrington) a bright, exuberant young novice with the Order of the Sisters of San Tanco who brightened the lives of all at the ancient Convent San Tanco, situated on a hilltop near San Juan, Puerto Rico.

Not the least of Sister Bertrille’s attributes was that she could fly. In fact, this 90 lb nun made the Wright brothers look like novices.

How? Well, “when lift + thrust is greater than load + drag, any object can fly”, claimed Sister Bertrille.

And this included her – primarily because she weighed so little. So whenever a stiff wind caught the starched coronets (headgear) worn by her order, off she went.

These aerodynamics were not always pleasant, and least impressed was her staid, conservative Mother Superior (Madelaine Sherwood).

But Sister Bertrille (Sally Field) got along well with the wise and humorous Sister Jacqueline (Marge Redmond), and with Sister Sixto (Shelley Morrison), the Puerto Rican nun who fought a running battle with the English language.

Sister Bertrille was also admired, from a distance, by Carlos Ramirez (Alejandro Rey), the rich, handsome playboy owner of a discotheque in town who was a patron of the convent. 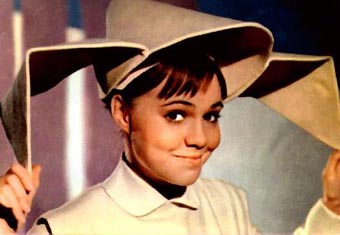 San Tanco was a small town with a population of 3,956. The convent was built in 1572 on land given to the sisters by King Philip of Spain. Their rent is one dollar a year.

Sister Bertrille’s knack for finding trouble was always ultimately overshadowed, by her sincere desire to do good and benefit her poor community.

The Flying Nun was based on the book The Fifteenth Pelican by Tere Rios.

1 9 6 0 (USA) 6 x 30 minute episodes Wrangler was the 1960 summer replacement for The Ford Show Starring Tennessee Ernie Ford on NBC. Pitcairn, the Wrangler (Jason Evers), was an adventurer who travelled about the Old...

1 9 6 5 - 1 9 6 7 (USA) 26 x episodes Atom Ant was originally aired as part of The Atom Ant/Secret Squirrel Show series on NBC, which featured Secret Squirrel, Precious Pupp (who hid his antics from...

This two-hour feature was one of the last productions of the BBC's Play for Today and depicted events in a Welsh valley after a nuclear holocaust. 16-year-old Ann Burden (Pippa Hinchley) lives alone on a remote country...