A long-running popular US daytime soap detailing the professional and personal lives of the doctors and nurses working at Port Charles General Hospital in Upper New York.

Created by Doris and Frank Hursley, the show was a 30-minute programme when it first aired in 1963 and was not particularly well received by the public or critics at first. 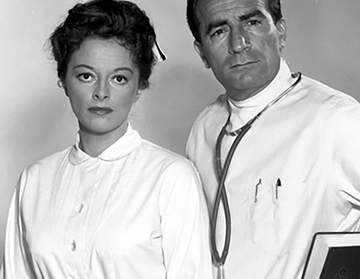 Under the supervision of Gloria Monty, who took over as the producer in the late 1970s, the show’s popularity steadily grew, until in 1980 it was the top-rated daytime drama.

In November 1981, an episode that featured the on-screen wedding of popular characters Luke Spencer (Anthony Geary) and Laura Vining (Genie Francis) – with the wicked Helena Cassadine (Elizabeth Taylor) in the background – attracted more viewers than any other single soap opera in television history.

Later the show moved into stranger areas with plots involving spies and such, and then in the 1990s, it switched to be a show that dealt with serious issues, such as AIDS, Cancer etc, with much of the action centred away from the confines of the hospital.

Not to be confused with an English series of the same name, General Hospital is the longest-running daytime show on ABC and on 17 April 2002, the series reached 10,000 episodes.