This long-running ITV game show was originally hosted by genial Canadian singer Jackie Rae, but most famously by Bob Monkhouse with the assistance of The Golden Girls – Carol Dilworth, Andrea Lloyd and Anita Richardson initially.

All were easily out-shone by regular helper, dizzy blonde Anne Aston, who thought that one and one made eleven, even though she had a maths A-level. 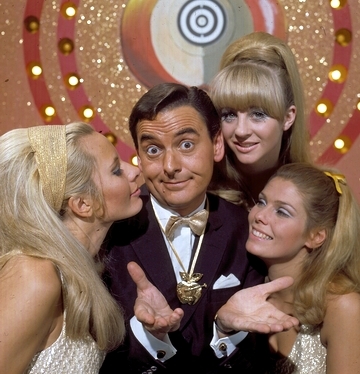 The format of the show came from Germany, where it was known as Der Goldene Schuss and featured contestants selected from home viewers and the studio audience.

The contestants had to guide a blindfolded cameraman on the studio ‘tele-bow’ and instruct him when to fire at picture targets.

Home viewers did so by telephone in view of their TV set and studio contestants from a phone booth in the ATV studio watching a monitor.

The show was not an immediate success. When it began in a prime Saturday night slot in July 1967, it was a ratings disaster. It had too many rounds, and the choice of host did not help matters.

Jackie Rae, the former host of Granada’s musical quiz Spot the Tune, failed to stamp his personality on the show. When Bob Monkhouse took over, he suggested the number of rounds be reduced to make proceedings rather less breathless and give guest stars a chance to shine. 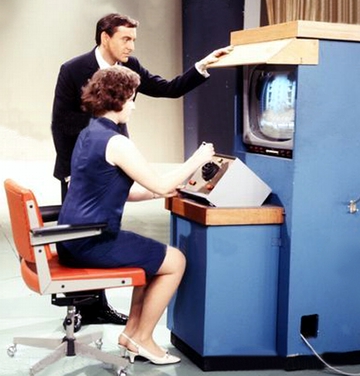 Originally named Heinz, in honour of the German original, the factotum who loaded the crossbow was also given the more homely name of Bernie, leading to the alliterative and still fondly remembered catchphrase “Bernie, the bolt”.

The show became extremely popular in 1968 when it settled into its regular Sunday tea-time slot and attracted 17 million viewers.

Monkhouse’s tenure on the show came to an abrupt end in 1972, when Francis Essex – who had returned from Scottish Television to become the controller of programmes at ATV – got wind of an apparent misdemeanour.

One week on the show, Wilkinson Sword shaving products were the runner-up prize. Shortly beforehand, Monkhouse had been seen lunching with an advertising executive connected to Wilkinson Sword, at which a brown envelope was handed over.

When this was reported back to Francis Essex, the assumption was that Monkhouse was taking cash bribes to feature Wilkinson Sword products. In fact, the parcel’s contents had been a rare and mildly salacious comic novel that the executive thought Monkhouse might enjoy.

Nonetheless, Essex was unhappy with the host’s relationship with an advertiser and sacked Monkhouse, replacing him with Norman Vaughan.

Unfortunately, in Monkhouse’s words, Vaughan took to the show “like a cat to water,” and his discomfort showed. Eventually, much to his relief, ATV released the affable Vaughan from his contract, but his successor was even more out of his depth.

Charlie Williams was a Yorkshire-born professional footballer turned comic. He was also black and won no points with the emancipation lobby through his willingness to tell racist jokes. Like Rae, he looked as comfortable as a hedgehog crossing the M1 and proved unable to keep the show on the rails. After six months, he was given the boot. 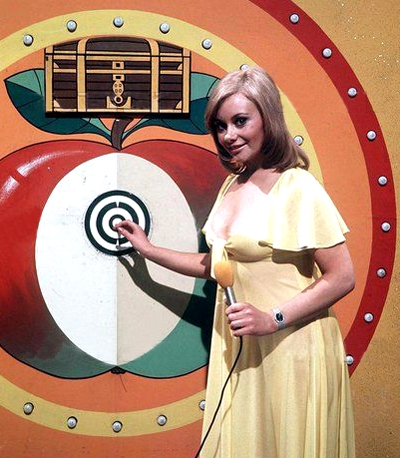 The experiment wrecked Williams’ career and Monkhouse was asked back in 1974 to give The Golden Shot a final boost.

Anne Aston – a young actress from West Bromwich – was working in her father’s travel agency under her real name, Anne Lloyd, when she heard about The Golden Shot.

She applied for the job, got it and changed her surname to the location of the studios at Aston. But her trademark dizziness came about unintentionally.

“As I went to add up on my first live show in 1969, someone told me there were sixteen million people watching at home. My mind just went blank, and I turned round and started adding up on my fingers. I thought I’d get the sack, but the producer loved it, and we decided to keep it that way. Mind you, it wasn’t easy adding up anyway, with apple juice from the targets dripping all over me”.

The first host, Jackie Rae, had to repeat one line eight times in each show – the word of instruction to the technician to load the dangerous tele-bow and simultaneously warn the studio of the fact that the weapon was armed.

“Heinz, the bolt!” was the original command. When Bob Monkhouse took over in 1967 he increased the number of times to load the tele-bow from eight to fifteen. But a lucky chance saved Bob from finding 57 ways of saying ‘Heinz’. Heinz went home.

He stayed long enough to train an ATV technician (Derek Young). “Grand”, Bob said. “Derek, the bolt – that sounds lousy. Let’s make it alliterative. What’s funny and begins with B?” 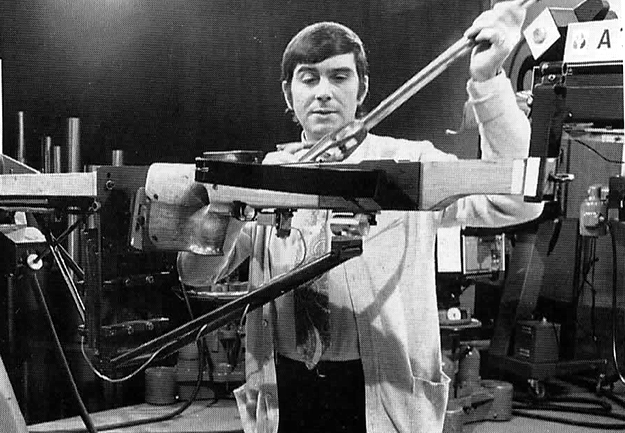 Colin Clews, the producer, favoured “Basil”, while Mr Monkhouse himself liked “Bartholomew”. But they were reckoning without the man himself. Derek liked “Derek”. “Well, you think of a name that begins with B and won’t embarrass you,” said Bob. And “Bernie” it became.

When the now successful series was moved from ATV’s Borehamwood studios to Birmingham, it meant that Derek Young had to train a Midlands-based technician. “What name are you going to call the armourer now?” asked Derek.

In Birmingham, the role was shared between Alan Bailey and Johnny Baker until Bailey left, and Baker continued alone for three years and became the face most readily associated with “Bernie”.

The final edition of The Golden Shot aired on Sunday 13 April 1975, with former hosts Charlie Williams and Norman Vaughan joining Bob Monkhouse on screen for the last show.