This French series – known in its country of origin as La Maison de Toutou – featured Hector the dog (a sad-eyed orange beagle in dungarees), breathy Zsa Zsa the cat (voiced by breathy Joanna Lumley), and Mrs Kiki the frog. 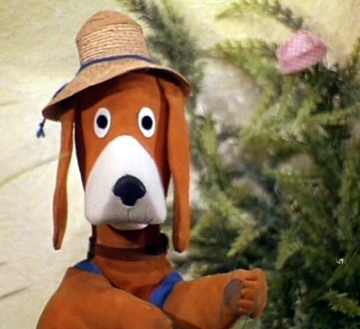 The show was exported from France to Germany, Switzerland, Belgium, Italy and Canada, but made its biggest impact in the UK. Acquired by the BBC in 1968, the show was promptly re-voiced by British actors.

Hector and Zsa Zsa lived in a house in the centre of a lovely garden full of flowers.

Kiki the frog was their giggling gingham overall-clad next-door neighbour who seemed to spend most of her time spying on them over the garden wall or squeezing through her sneaky access hole in the wall for some excitement.

Hector was inevitably called upon to help the two ladies in some way or other, and being a courteous ‘old world’ gentlemanly dog, he would willingly oblige. 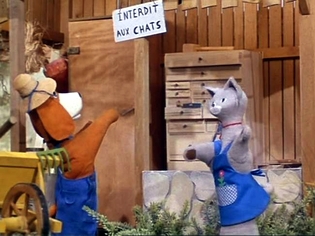 In return, Kiki and Zsa Zsa would often play tricks on Hector to teach him a lesson, leading him to say his catchphrase at the end of every episode; “I’m a great big <whatever he was in that episode> old Hector”.

Relationships were very traditional, with Hector dressed in dungarees, Zsa Zsa (dressed in a red apron) showing off her sewing skills and chiding Hector for his bad manners, and Kiki (whose main talent seemed to be forecasting the weather) wearing pink gingham while coyly asserting “Mr Hector’s such a gentleman”. 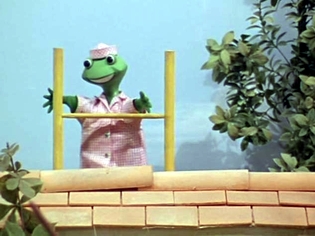 Occasionally Hector tried to better himself, like when he took a correspondence course in guard-dogging. Ultimately though, it was all to no avail, and deep down Hector was more than happy with his lot in life.

First broadcast in the UK on 9 September 1968, Hector’s House filled the BBC’s 5.40 pm weekday timeslot after it was vacated by The Magic Roundabout (which was also a French import).

Filling the prime pre-news slot, it aimed to appeal across the generations, and it succeeded. Children and adults alike voted its dog star ‘a big old lovable Hector’ and made sure they tuned in. 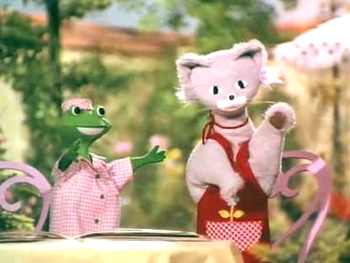 For 15 years Hector’s barking was silenced, but then in 2002 the Royal Bank of Scotland bizarrely decided their customers might like to have him back.

Four 30-second commercials were made with re-constructed Hector, Zsa Zsa and Kiki promoting the bank’s One Account service.