He finds a magic boomerang among some Aboriginal relics his great-great-grandfather left in the attic which, in flight, makes time stand still for everyone but the thrower. 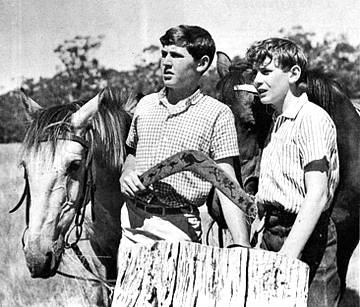 Tom and his pal, Wombat, begin to use the boomerang to foil the nefarious deeds of assorted villains and neer-do-wells.

Mischievous Wombat occasionally also used the boomerang to play tricks on the locals, while Tom was far more responsible and would use the boomerang only when its powers were truly needed.

The series – produced at Woodend, 40 miles from Melbourne – was extremely conscious in its deployment of Australian symbols which no doubt helped its marketing overseas. It suffered, though, from its rabid insistence to show nothing unpleasant – no violence, no guns, nothing that would upset the vicar.

But there was a lot of horse riding. Sadly, when you’ve seen one horse you’ve seen the lot. Especially if the horses are being ridden for long intervals and to no particular purpose. 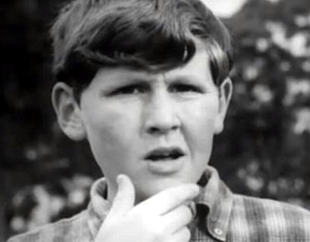 For the final six episodes, filmed in 1966, there were significant changes to the cast, characters and setting, with a shift in emphasis from adventure to a more light-hearted show with an element of comedy. 15-year-old Robert Brockman played Nugget Morris, the new custodian of the magic boomerang – David Morgan was now too old at 19 to play the lead role – and Gavan Ellis played his older mate.

The Magic Boomerang screened in Australia on the ABC and was sold to Canada, Britain, Italy, Malaysia and Rhodesia.