Eric Morecambe (born Eric Bartholomew – the tall one with the glasses) and Ernie Wise (Real name, Ernest Wiseman – the straight-man with the short fat hairy legs) first appeared together in 1941.

Arguably Britain’s most popular TV comedy team, they absolutely ruled British small screen comedy variety for almost a quarter of a century on both ITV and BBC.

In the early 1960’s they appeared in a series of comedy music shows. Eric would be striding around singing “Boom Oo Yatta Ta Ta” off-key and grabbing Ernie by the throat demanding “get outta that!”.

Some of the running jokes throughout their career were; Des O’Connor; Luton Town FC (Eric was a director of the club); Ern’s hair (“you can’t see the join”); Ern’s plays; Eric wobbling his glasses and saying “what do you think of it so far? – Rubbish!”; The fat lady (“I love you all”) . . . 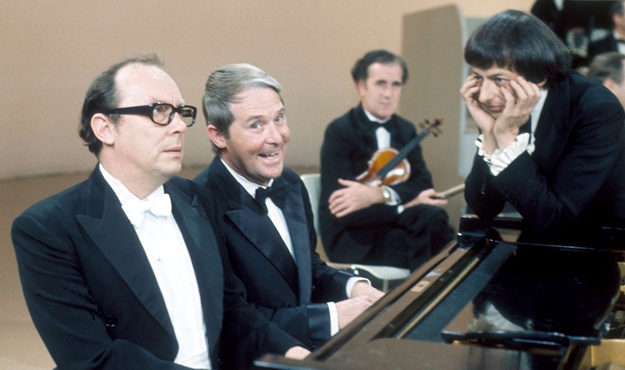 And the running gag at the end of the show, where Ernie would get Eric to leave, pretending the show was over, and then sneak back to do a closing number with the special guest.

We all knew that Eric would walk along the back of the set in his mac with his carrier bag, but the repetition never ruined the appeal of the joke. In fact, if anything, it heightened it.

Unusually for the sixties, in the series, Eric and Ern were supposed to share a flat together (unusual for two adult single men).

This was seen in every show during Ernie’s ‘play wot I wrote’ sketch where the weeks guest star would be humiliated and embarrassed. Even more questionable for the era, they shared a bed together. 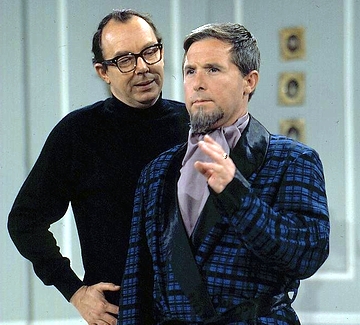 But Eric and Ern are probably best remembered for their spectacular Christmas shows from the 1970s and 1980s.

The first Christmas special was shown on Christmas Day 1969 with special guest stars Kenny Ball, Sacha Distel, Frankie Vaughan, Fenella Fielding, The Patersons and Nina. By the time the series was into its tenth year, the Christmas special had grown into a huge production with a list of guest stars including Arthur Lowe, Penelope Keith, James Hunt, Elton John, and a full cast of newsreaders and presenters in the infamous Nothing Like A Dame routine.

Also in that show was Angela Rippon, newscaster supreme and former dancer. The duo last worked on TV together in a 90-minute comedy thriller in 1985 called Night Train to Murder. They were truly comic geniuses and I will always miss them dearly . . .

Eric Morecambe collapsed and died on 29 May 1984 after appearing in a Sunday concert in Tewkesbury, Gloucestershire. He was 58 years old.

Ernie Wise died on 21 March 1999 having recently undergone emergency heart by-pass surgery in the USA. He was 73 years old.

Make me happy through the years
Never bring me any tears
Let your arms be as warm
As the sun from up above
Bring me fun, Bring me sunshine, Bring me love

That Was The Week That Was