In the Sydney suburb of Balmain – a harbourside suburb of the city’s inner-west that was at the time considered barely a cut above a slum – young married couple Rita (Judi Farr) and Wally (John Meillon) Stiller live with Rita’s widowed father Dominic McGooley (Gordon Chater). It would be a gross understatement to say they sometimes find it hard coping with his demands . . .

In its day, this black-and-white ATN7 sitcom was a ratings success and still stands as one of the high points of Australian comedy. However, writer-producer Ralph Peterson first created the show while working in the UK and offered it to ITV, who passed on it.

When ex-patriot actress June Salter returned from London to Australia to appear in The Mavis Bramston Show it was suggested that her husband, John Meillon, who at the time was one of the stars of the British J Arthur Rank film stable, would also return if a suitable vehicle could be found for him.

Peterson adapted the original concept to Sydney and Meillon accepted the role that set him on the path to becoming one of Australia’s favourite sons.

The British origins of McGooley are evident in the influence of two outstanding British sitcoms of the era, Steptoe and Son and Till Death Us do Part. The elder Steptoe is a forerunner of Chater’s more lovable McGooley and there are touches of Harold Steptoe’s aspirations and self-delusion in Meillon’s Wally Stiller.

Self-important, chauvinistic, vain, but deep down a decent bloke and somehow innocent, Meillon’s performance is a standout of the show. He is well matched by Judi Farr as his wife, Rita, fulfilling the role of simple, downtrodden housewife. 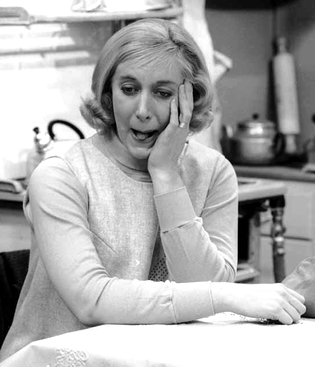 Chater’s McGooley was the lynchpin of the series – creator of chaos, the troublemaker, pest and thorn in his son-in-law’s side.

The regular cast was filled out by Stewart Ginn as Perrigrine Nancarrow – McGooley’s fishing mate and partner-in-crime – and Noeline Brown as Rosemary Urkin (better known as ‘Possum’), Wally’s divorced, sophisticated and liberated sister, who provided some glamour and a stark contrast to the domesticated Rita.

The series premiered on the Seven Network in September 1966 and ran for 88 episodes.

When Gordon Chater left the series in 1970 the title was changed to Rita and Wally and the setting moved from Balmain to Sydney’s opulent North Shore. John Meillon, Judi Farr and Noeline Brown continued in the new series, and Tessa Mallos was introduced in a support role as Margaret Thurston, the Stiller’s new next-door neighbour.

British comedian Spike Milligan appeared in one episode of Rita And Wally while visiting Australia, but the show was nothing without the late great Chater and folded after 23 episodes. Gordon Chater returned as McGooley for the final episode.