The titular hero was a member of the non-violent Universal Peace Corps who left his home planet of Radion to travel to Earth. 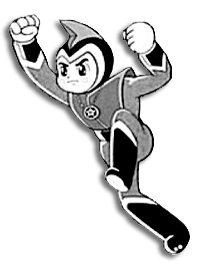 He crash-landed in the Southwest of America and was rescued by young Diana Worthy, whose family had made a fortune in the oil business. Here he adopted the Earthly name of Bobby and moved to New Metropolis in order to fight the minions of injustice.

His mission was to bring our planet into the Galactic Union of Worlds, but first, he had to rid the world of all war-lovers and violent evil-doers, which he accomplished with the use of his power-giving pendant, which frequently ran out of energy thus placing him in enough danger to keep the excitement levels up from episode to episode.

Prince Planet was a unique hero due to the fact that he refused to use violence to defeat his foes. Instead, the young champion used speed and strategy to make his enemies beat themselves. Sometimes he enlisted the aid of his friends, magician Haja Baba and wrestler Dan Dynamo.

Prince Planet, which was animated in black and white, was eventually pushed aside by newer cartoons produced in colour.