Making very good use of the Australian bush landscape (and yes, it really does look like that) Skippy – the bush kangaroo – used to bound through the Waratah National Park Wildlife Reserve in Sydney with his adoring owner, Sonny Hammond (son of the park ranger) to an irritating banjo-driven theme song.

Stories related the duo’s adventures as they helped to protect the National Park from smugglers, rustlers and escaped convicts.

Goddard recalled about filming the series: “I was wee’d on by a wombat, I got lice from an emu or a koala . . . I had to wash in DDT”.

There were tearful moments whenever Skippy was ill or the victim of a villainous plot, but the eponymous marsupial was very, very intelligent – able to open doors, untie and tie complicated knots, operate a radio, play piano and drums, rescue bushwalkers, foil villains and understand and communicate with humans . . .

A typical exchange between Skippy and Sonny went like this:

Sonny: (looking worried) What is it Skip?

Skippy: A funny clicking sound like someone tutting disapprovingly

Sonny: What kind of accident, Skip?

Sonny: Better run and tell dad to get help, Skip

Sonny: Oh alright then Skip. You go and get the helicopter – I’ll wait here.

The production company, Fauna, tried to preserve the myth that there was just one Skippy, but there were actually many – dead and alive.

Nine eastern grey kangaroos were used in the filming of the series while a stuffed roo was used for rear shots, and kangaroo-paw bottle openers were used for close-up shots where the script called for the cluey roo to hand over money or play the piano . . . 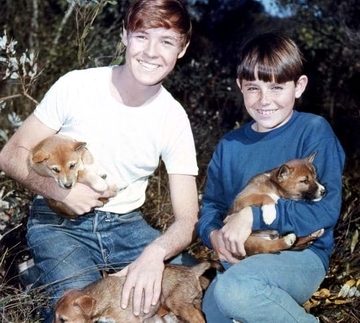 Neither was Skippy’s distinctive “tch tch tch” call for real either. It was dubbed in later.

One particular kangaroo called Jo Jo (who wore a diamante necklace) was used for shopping centre appearances and suchlike.

Sold to 128 countries, in its heyday the series was watched by a global audience of over 300 million viewers a week. Perhaps the biggest international success story of Australian TV, the series was dubbed into 25 languages and known as Skippy el canguro in Mexico and Skippy, das Känguruh in West Germany, as well as being popular in Japan.

A short-lived revival of the show in the early ’90s, The Adventures of Skippy (1992), sported an entirely new cast featuring Andrew Clarke as an adult Sonny Hammond operating a wildlife park.

DISCLAIMER: Clancy wasn’t really the Hammond’s sex slave, just a friend of the family who acted as their housekeeper – but it doesn’t hurt to fantasise, does it?