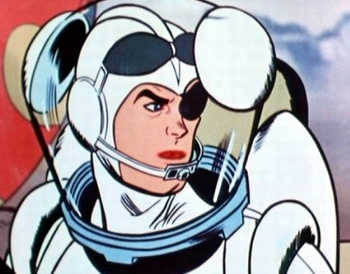 This cartoon series from Cambria Studios featured a technique called “Synchro-Vox” which involved camera movement and the use of real actors’ lips inside still frames to simulate animation, as seen in Cambria’s other series, Clutch Cargo.

The series of four-minute shorts was produced and syndicated in 1962 and showcased character designs by comics and cartoon legend Alex Toth (who went on to design Hanna-Barbera’s Space Ghost). 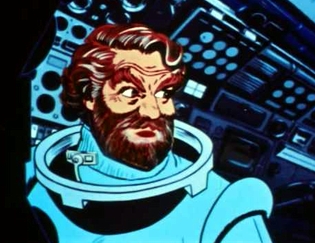 Space Angel related the adventures of the titular, eyepatch-wearing rocket-man hero (real name Scott McCloud), who, as an agent for the Earth Bureau of Investigation, helped protect the universe from various villains (the evil Queen Zora in particular) – launched from the space station Evening Star aboard his ship, Starduster.

Along for the ride were cohorts Taurus, a hot-headed Scottish mechanic; Crystal Mace, a scientist/navigator; and Professor Mace, Crystal’s genius inventor dad. 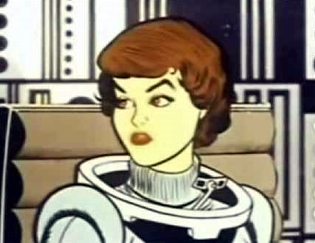 True to its space opera roots, every four-minute episode of Space Angel ended with a thrilling cliffhanger. 260 shorts were produced, syndicated either separately or as half-hour weekend blocks (one full year’s worth) over the show’s all-too-brief lifetime.