Stand by for action. Anything can happen in the next half hour.

With the success of Supercar and Fireball XL5, Gerry Anderson launched his third “Supermarionation” programme, Stingray – which also has the honour of being the very first British TV series to be filmed in colour – although it was originally broadcast in black & white.

Stingray relates the exploits of the World Aquatic Security Patrol (WASP) in the 21st century.

WASP are a type of ocean police force attempting to keep the seas free from the forces of evil because let’s face it, that’s always been a problem . . . 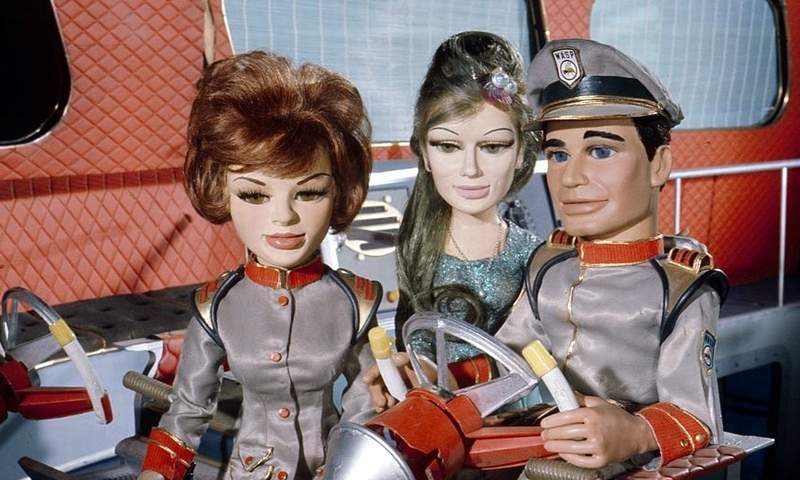 The main perpetrator of evil is Titan, a green-skinned megalomaniac and the ruler of Titanica – (pictured below left) rumoured to be based on Laurence Olivier.

Titan has an underwater army called the Aquaphibians who travel in a gothic submarine called Terror Fish.

He also has a slightly less competent spy on land, called Agent X20, who is a master of disguises but has terrible bug-eyes. 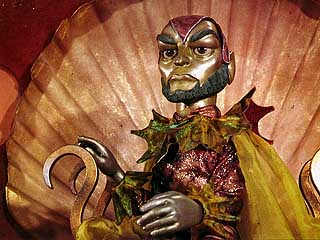 Fortuitously, WASP has the Stingray – An atomic-powered submarine equipped with sixteen sting missiles and based at Marineville which is WASP’s Island Headquarters (pictured below), connected to the ocean by a tunnel from which Stingray emerges each episode.

The captain of Stingray is Troy Tempest – dashing, blue-eyed and square-jawed hero. Also onboard is drawling southern gentleman, Lt. George Lee “Phones” Sheridan (scientific genius and Troy’s offsider). Phones is also one of the few marionettes who actually smokes cigarettes.

The third crew member of Stingray is Marina – a mute, green-haired, mermaid beauty. If you want to get specific, she is the daughter of Aphony (benevolent ruler of Pacifica) and was rescued from the clutches of Titan by Troy and Phones in episode 1.

The head of WASP is Commander Sam Shore. Sam was disabled in a submarine accident and is a paraplegic, getting around in a mini hovercraft. He is assisted by his beautiful daughter, Atlanta, who fancies Troy terribly and constantly vies with Marina for his attention (Was Stingray the first-ever marionette soap opera?).

Even when stacked against Anderson’s later works, Stingray stands up well. There was plenty of kiddie-targeted action, while the more mature viewers could enjoy the spoofs which featured often.

Troy Tempest was a caricature of a movie idol (apparently based on actor James Garner) and constantly had his eyebrows raised in a quizzical fashion.

Despite the series being made in England, its lead characters were all American, a decision made on the grounds of expediency: Gerry Anderson believed this would make the show more saleable to US broadcasters, without alienating UK viewers who were already accepting of American-made shows.

The decision paid off and Stingray was bought by the US network NBC.

Oink, the pet seal that travelled with the Stingray crew, was dropped from the series after only a few episodes.

“PWOR”, the response given by Troy Tempest and Phones to orders given by Commander Shore, stands for “Proceeding With Orders Received”.