Top Cat, the indisputable leader of a gang of New York City alley cats was a feline cartoon version of Sergeant Bilko from The Phil Silvers Show.

TC (as he was known to his gang) was an irrepressible con-artist who lived in a customised dustbin (“trash can” to our trans-Atlantic friends), stole milk from doorsteps and used the local police phone for his personal calls. 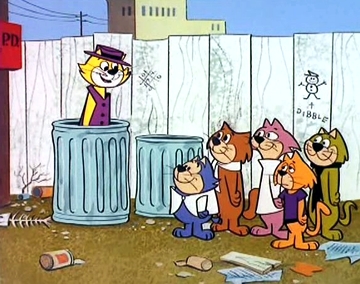 He was always on the lookout for new money-making scams including a memorable occasion when he tried to pass off his tone-deaf gang member Benny the Ball to Carnegie Hall as the world-famous violinist, Lazlo Lazlo (in the episode ‘The Violin Player’).

Officer Dibble was the beat cop from the 13th precinct who had the unenviable job of trying to keep TC and his gang under control.

The full line-up of the gang (all loosely based on members of Bilko’s entourage) were; TC, Benny the Ball (a vision of chubby and well-meaning incompetence), Choo – choo (always so terribly earnest), Spook, dim-witted Brains and Fancy-Fancy, a ladies Tom cat

Top Cat was one of the few animated series to debut in prime time in the US.

The show aired as Boss Cat in the UK, in order to avoid inadvertently promoting a short-lived brand of cat food.

He’s the boss, he’s the VIP
He’s the championship
He’s the most tip-top Top Cat!