Top Of The Form began life at 7.30 pm on Saturday 1 May 1948, as a radio series on the BBC Light Programme. The first two teams were Sloane School and Davenant Foundation School – London boys’ schools – with questions put by Wynford Vaughan Thomas.

The following year it took on its familiar shape, touring the country and broadcasting from the schools it visited, pitching girls against boys. This necessitated two question masters, so Vaughan Thomas gave way to Lionel Gamlin and Robert MacDermott. 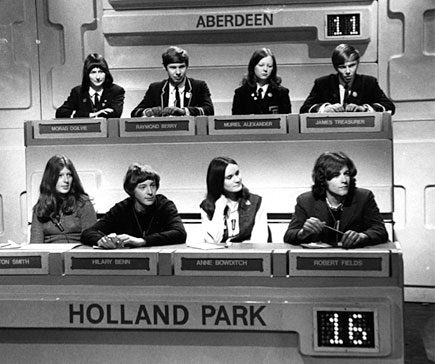 The format transitioned to BBC television in 1962, where it was titled Television Top of the Form and hosted by Geoffrey Wheeler.

Reportedly the series was finally cancelled because the competitive nature of the show jarred with modern educational philosophy. The show was also expensive to produce, requiring two separate outside broadcast units.