“Unfortunately, we can’t return any paintings, but a prize is given for each one shown”

Vision On was started in 1964 and was originally designed as an educational programme for deaf children – hence the hand signals and the distinct absence of talking.

It replaced the patronising For Deaf Children (1952) and was hosted throughout by Pat Keysell, joined early on by artist Tony Hart and later on by the madcap Sylvester McCoy. 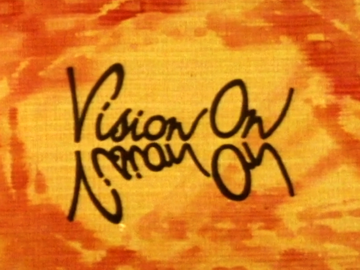 Patrick Darling and Ursula Eason created Vision On, with the idea that it was to be a very fast programme so that everyone would realise the deaf were quick off the mark and very observant.

Using a mixture of artwork, mime, live action, sign language, animation and trick photography, everything on the show was done in a highly visual way.

All the early episodes went to air live, as recording a programme was cumbersome and expensive in the dim, dark days of 1964.

A popular regular item was ‘The Gallery’ – a display of viewers’ artworks and sketches shown to the fantastic xylophone/vibraphone accompaniment of a piece of music called Left Bank Two. 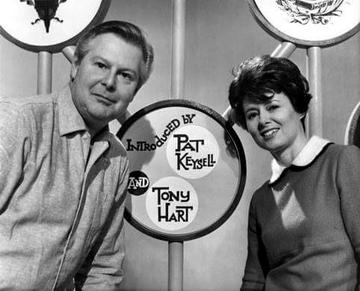 The concept of The Gallery was adopted from an earlier programme called Sketch Club (presented by Adrian Hill) where children would send their work in to the studio.

By the early 70s, Vision On‘s Gallery attracted 12,000 pictures a week and the BBC hired grandparents to sort through all the paintings and drawings for the programme.

Also popular were the Burbles, who talked to each other using large speech bubbles. We never actually saw the Burbles, just the bubbles. Originally they lived inside a grandfather clock.

The Prof (the man in a white coat who would be blown up regularly a la Tom and Jerry) was filmed in stop-motion by three Russian camera operators at the BBC, including David Cleveland (who also played the Prof).

Other popular segments included Humphrey the tortoise, the Woofenpuss (a red feather boa that ran around the studio) and pipe-men Phil O’Pat and Pat O’Phil. 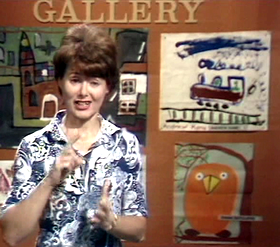 And in each show, Tony Hart would produce a creative piece of art, despite all the chaos and mayhem around him.

He was the first TV artist to do truly massive drawings, trotting off (in his pale blue short-sleeved shirt) to a disused airfield with a film crew and a road worker’s white-line painting machine, and creating something wonderful.

The show lasted 12 years but had started to look a little tired and old. The surreal element was re-launched as Jigsaw but sadly, deaf children had no show of their own anymore.

With the end of Vision On, Hart moved on to the general kiddie art programme Take Hart – which in 1977 introduced the world to animated plasticine creature Morph – and Hartbeat.

The odd little animated figure on springy legs that bounced around the screen to introduce the show was called ‘Grog’ (because he seemed to be half grasshopper and half frog). Tony Hart says; “we were all writing our names in pencil on a piece of paper, folding it, rubbing it and opening it up . . . and somebody said, “let’s do Vision On, so I wrote ‘Vision On’, opened it up, and there was this Grog”.

The team who produced Vision On actually helped pioneer some of the visual techniques such as chromakey and colour separation effects. A localised version of the show aired in France as Déclic. 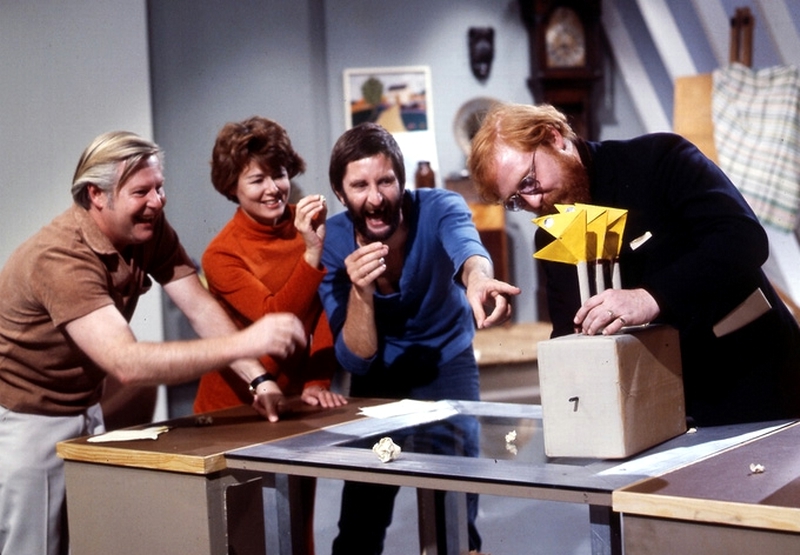 Tony Hart died on 18 January 2009, aged 83, after suffering two strokes which robbed him of the use of his hands and left him unable to draw. Pat Keysell passed away on 31 October 2009, aged 83.