Home Television Drama Voyage To The Bottom Of The Sea Voyage To The Bottom Of The Sea related the story of the atomic submarine Seaweed . . er . . . Seaview and her crew in this TV spin-off from Irwin Allen’s 1961 blockbuster movie of the same name.

The adventures continued for four years, making it the longest-running science fiction show on network television (at the time).

The star of the show was the most powerful and advanced submarine on earth, an instrument of the Nelson Institute of Marine Research and a testimony to the genius of its creator, Harriman Nelson. Originally there were two subs, but the Seaview‘s sister ship, the Polidor, was sunk in the third episode.

The Seaview took on a wide variety of secret missions, and consequently carried many passengers: spies, politicians, world leaders, military men, castaways, aliens and monsters, and especially mad scientists, the speciality of the house (sub).

The crew of the Seaview was top-notch: The brilliant Admiral Nelson (Richard Basehart), the ultimate scientist; the courageous, though terribly macho, Captain Crane, (David Hedison) devoted to his ship; the steadfast first officer, Chip Morton (Robert Dowdell) – and could anyone but an American be called “Chip”? – and the stalwart Chief Curley Jones (Henry Kulky), sadly lost after the first season but ably replaced by the inimitable Chief Sharkey (Terry Becker).

The crewmen, Kowalski (Del Monroe), Patterson (Paul Trinka), Riley (Allen Hunt) – and the many less fortunate others who gave their lives for the ship – proved themselves capable again and again of handling any situation with courage and ingenuity.

Voyage was probably the most serious of Irwin Allen’s efforts – greatly aided initially by the re-use of expensive props from the original 1961 film – although it certainly had its comic moments.

The show ultimately plummeted to the depths of Sci-Fi trash after season two’s horror show gimmicks and season three’s weirdness (‘The Plant Man’), season four was reduced to attacking the crew with toys bought from a kiddie shop.

While the basic premise was based in reality, many of the missions were almost nonsensical, and the crew’s inability to remember that the villain always hid in the air conditioning simply beggared belief.

Irwin Allen continued his 60s Sci-Fi endeavours with Lost In Space, Land Of The Giants and The Time Tunnel. 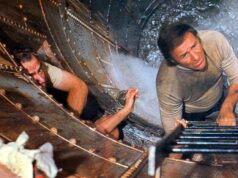