The White Horses, a Yugoslav-German co-production (originally titled Ferien in Lipizza) about a teenage girl’s equine adventures, was originally filmed with German dialogue and Serbo-Croat subtitles, before being dubbed into English and screened on BBC One.

The programme was shot in black and white in Yugoslavia in 1965 and followed the adventures of 15-year-old Julia (young Austrian actress Helga Anders) who left Belgrade to spend a holiday with her uncle Dmitri (Helmuth Schnider) on his stud farm in Lipica (in modern-day Slovenia) where he is raising white thoroughbred Lipizanner horses.

Shortly after she arrives, a stallion named Boris was stolen and Julia set off with the head groom, Hugo (Franz Muxeneder) to find him.

The thieves dyed the horse’s coat brown to conceal his true identity, but that didn’t fool the intrepid pair, who recognised him immediately and returned him to his rightful owner.

Julia and Boris subsequently formed a strong affinity, and horse and rider had several other outings together before the end of what turned out to be the only season. The 12 hour-long adventures were repeated by the BBC in the 1970s, but the Beeb later wiped its tapes. 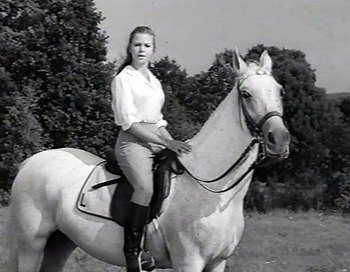 The show has since developed a cult reputation among fans, with devotees buying complete foreign-language videos and swapping music files on the internet.

The theme tune, written by Michael Carr and Ben Nisbet (and sung by Jackie Lee) reached the UK Top 10 in 1968.

The theme song came about when the dubbing company asked Carr and Nisbet to write a theme for a “popular East European series” (which would seem to be a major oxymoron).

Originally intended and used only for the dubbed English version of the show, such was the appeal of the song that it was later adopted in all markets.

Sadly Helga Anders died of heart failure in Bavaria, Germany, in 1986 as a result of her addictions to alcohol and drugs. She was just 38.