Chorlton and The Wheelies

Chorlton and the Wheelies featured Fenella the Witch (pictured) who did not like anyone to enjoy themselves.

Fenella lived with her army of evil toadstools in Spout Hall (a giant kettle) and had cast a spell upon Wheelie World – home of The Wheelies.

The Wheelies (talking balls on wheels) were usually very happy and energetic little creatures. Sadly, Fenella’s spell left them in a lifeless world of silence and misery. 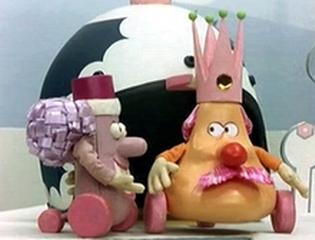 One day a mysterious giant egg appeared on the scene. Out of this egg hatched Chorlton, the Happiness Dragon (who actually looked more like a plump dog and had a thick Northern accent). Chorlton brought back happiness and joy to Wheelie World, much to the annoyance of Fenella.

The Wheelies themselves were rather annoying (Zoomer and Jenny really did need a good kicking), but the star Wheelie was the fabulous Queen Doris, forever saying “Gorgeous!”.

Between 1976 and 1979 three series of Chorlton and the Wheelies were made by Cosgrove Hall for Thames Television – 1970s children’s TV at its strangest and best.