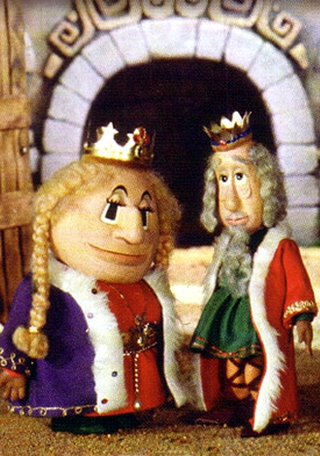 The series featured the Bygones – a group of primitive people ruled by the authoritarian Queen Ethelbruda – a hawk-nosed vision in plaits – and her hen-pecked husband, King Woebegone.

Their offspring – the foppish Prince Idlebone and the comely Princess Tizzibel (Tizzy, for short) – brought about as much joy as Jest-a-minit the jester, or Mudlin the hapless magician.

Happily, Cue-ee-dee the inventor had discovered a supply of crude oil under the castle and was permanently engaged in exploiting this commodity for everyone’s gain, with a series of clunky inventions.

Unfortunately, a rival clan – Beosweyne (a northerner who roars like a tiger but is as harmless as a pussycat) and the Hasbeenes – had designs on the oil and so began a bloody and unending territorial battle.

Royal security is managed by an oaf called Elbow, who spends much of his time harassing an unfortunate subordinate, the lovable but luckless Osmosis while keeping the Hasbeenes on the right side of the castle walls.

The Cloppa series was filmed in a converted church in Southwark Park Road, London.