The childrens’ mother, Joan, was originally played by Diana Hyland (of Peyton Place fame), who had already undergone a mastectomy when she started shooting in early 1977. Diana began suffering from back pain and went into the hospital for traction.

When that didn’t help, she called the producers to her bedside and delivered the news that she had cancer. She toughed it out, suggesting the show record her voice for telephone scenes, but asked to be sent home in mid-March. She died in late March at the age of 41.

By season two, Tom had married Abby (Betty Buckley), the tutor of his son, Tommy (Willie Aames). But in keeping with Eight Is Enough tradition, her landing was none too smooth.

A stage actress who’d most recently worked in London and New York, she didn’t adjust well to the routine of TV shooting. Nor did she love her adopted home.

She also hated the changes made to her character after she signed on. She agreed to play a woman named Mitch, who was a high-spirited, independent gal before ABC exec Fred Silverman had the writers morph her into quiet, demure Abby.

David (Grant Goodeve), the oldest Bradford child, was a contractor who originally worked for the Mann Construction Company before forming Bradford Construction with his father.

David dated and later married Janet McArthur (Joan Prather), a lawyer with the firm of Goodman, Saxon and Tweedy.

Medical student Mary (Lani O’Grady) was the most studious of the Bradford children. While training to become a doctor she interned at Saint Mary’s Hospital where her inspiration was family friend Dr Craig Maxwell (aka Dr Max).

Joannie (Laurie Walters) – who was named after her mother – worked as a researcher (then a reporter) for KTNS-TV, Channel 8, in Sacramento. While all the Bradford children found it difficult to adjust to Abby at first, it was Joanie who felt the most out of place. Joanie believed that because she bore her mother’s name and looked like her, Abby resented her.

Nancy (Dianne Kay) was the prettiest of the Bradford girls but dropped out of State College when she felt incapable of doing the required work. Before acquiring a job at the Bates, Callahan and Chester brokerage house (later, the Fenwick, Hargrove and Elliott brokerage house), Nancy worked as a model and appeared on the cover of Epitome magazine; she was also the ‘Sunshine Soda Girl’ in TV commercials. 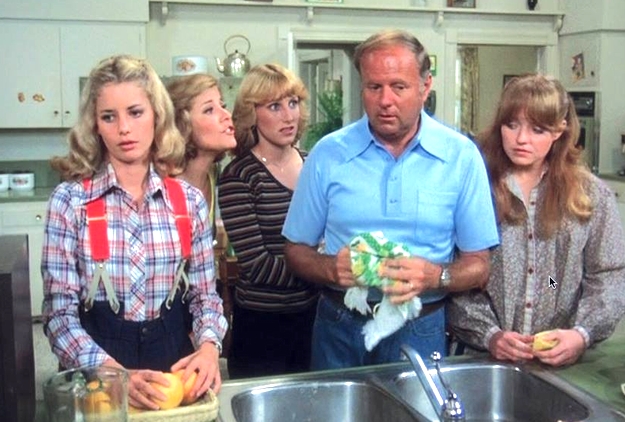 Susan (Susan Richardson) was undecided about her future. She attempted to become a police officer but failed the physical endurance test, and her fondness for children ultimately led her to a job at a daycare centre. Susan later married Merle ‘The Pearl’ Stockwell (Brian Patrick Clarke), a minor league pitcher for the Cyclones baseball team who later became a pitcher for the New York Mets.

Tommy (Willie Aames) was the most troublesome of the Bradford children. He formed his own band, called Tommy and the Actions, and constantly rebelled against parental authority and longed to quit school and become a rock musician.

Elizabeth (Connie Needham), the youngest of the Bradford girls, was studying dance and hoped to become a professional dancer. Although she was very pretty, she felt awkward around boys (“I’m like a cross between Marie Osmond and a kewpie doll”).

Two cast members who went on to bigger and better things were actor Mark Hamill – who played the oldest son David in the pilot of EIE – and Ralph (The Karate Kid) Macchio who joined the cast in the final season as Abby’s troubled nephew Jeremy.

Hamill got out of his five-year contract with the series because he had a feeling the sci-fi movie he had just made would be a hit and would spawn many sequels. You can guess the title of the movie, I’m sure!

EIE producer Bob Jacks tried to convince the actor his future was safer with a hit series than a long shot space picture. When that didn’t work, Lorimar (the company producing the show), threatened legal action if Hamill didn’t play along.

Just before shooting on the first episode was to begin, Hamill knuckled under. But he subsequently banged his face up in a car accident and was released from his contract. The Force ended up being with him, his career as Luke Skywalker was launched, and actor Grant Goodeve stepped in as David Bradford.

Losing Hamill was just one of the misfortunes suffered by the cast and producers of the show. Three days into shooting the pilot, the actor playing Tom Bradford was canned by ABC and replaced by former child star Dick Van Patten, prompting the director to quit.

After the pilot was finished, network execs decided they didn’t like the actors playing Nancy and Tommy so they went, too.

ABC and Lorimar also had some legal tussles and all through the first season a credit informed the audience that the show was “based on a novel by Tom Braden.”  The 1975 book by Washington columnist Braden was actually an autobiography, not a novel! Some of Tom Braden’s kids resented a show giving all of America a false impression of what they were really like: Elizabeth Braden didn’t appreciate the episode where drugs were found in a car occupied by her TV counterpart; Nancy Braden wasn’t too happy when Nancy Bradford told her TV dad that she didn’t wear a nightgown; and Tommy Braden was humiliated when Tommy Bradford’s first date became an exercise in misery.

Given that it lasted a little over four years, the show obviously made it through the rough spots. Not that its luck ever really changed, though.

During shooting for the final season, Lani O’Grady, wiped out on her bike, breaking her jaw. It was wired for six weeks.

On 18 October 1987, NBC aired the television movie Eight Is Enough: A Family Reunion. Tom was now editor of the Sacramento Register, and Abby (played by Mary Frann) owned her own restaurant, the Delta Supper Club. Mary was a doctor and married to Chuck (Jonathan Perpich); Susan and Merle had a daughter named Sandy (Amy Gibson); Elizabeth and her husband, Mark (Peter Nelson), owned a car restoration business; Tommy was a struggling lounge singer; Joannie – now an actress – married film director Jean Pierre (Paul Rosilli); architect David was divorced from Janet; Nancy was married to Jeb (Christopher McDonald) and was now a sheep rancher, and Nicholas was in college.