Jamie and the Magic Torch

Each episode of Jamie and the Magic Torch began with Jamie being tucked into bed by his mum. But no sooner has she left the room and Jamie is out of bed and shining his magic torch on the floor.

This opens up a magic portal – but not downstairs to the living room as you might expect. With his bobble-hatted talking sheepdog Wordsworth, Jamie slides down a helter-skelter to a strange world called Cuckoo Land.

Here Jamie meets characters like Mr Boo (who floats around in a flying submarine), Strumpers Plunkett (who plays tunes on his nose), Jo-Jo Help (who has a million-and-one excuses why he can’t actually help), Nutmeg (a rag doll) and Officer Gotcha (half-man, half-unicycle with a penchant for eating his truncheon). 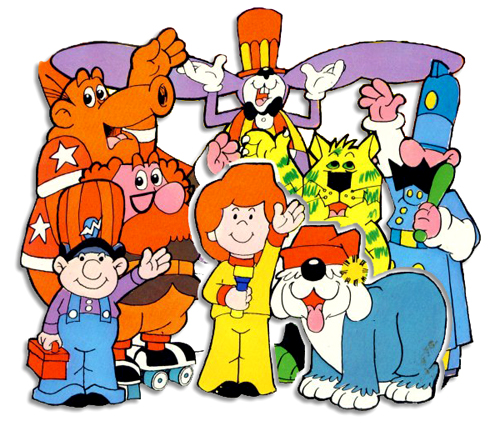 After using his magic torch to do something magical, Jamie returns to his bedroom via the tree at the bottom of the helter-skelter and gets some kip.

Jamie was made by Manchester-based company Cosgrove Hall, makers of Danger Mouse, Count Duckula and many other animated children’s shows.

In February 2002 a search began by Fremantle Media (the company that owns the rights to Jamie & The Magic Torch) for a child actor to star in a live-action movie version of the show. They announced they had already found a dog to play Wordsworth but were still seeking “an adventurous red-headed boy” aged between five and nine.