Premiering in February 1972 with a two-hour pilot originally titled Kung Fu: The Way of the Tiger, The Sign of the Dragon, the world was introduced to “Grasshopper” – the nickname for the young Kwai Chang Caine (David Carradine), given to him by Master Po, the blind Shaolin priest.

In flashbacks set in the Who Nun Province in China, Master Po (Keye Luke) playfully teaches the young, orphaned Caine – the offspring of a Chinese woman and an American sea captain – about the ebb and flow of life and the interconnectedness of all things. 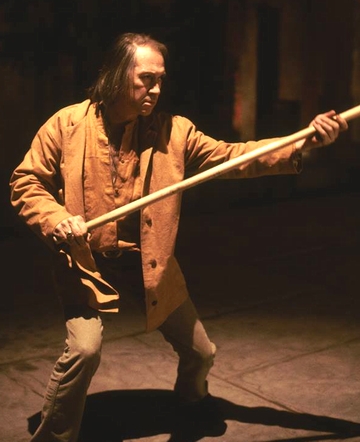 They tutored him in a mystic, philosophical way of harmony and the “oneness of all things” and a strict code of non-violence whenever possible.

They also taught him the martial art of Kung Fu. By challenging him to “Snatch the pebble” time and time again, Kan instructs Caine in the self-awareness and concentration needed to achieve any goal in life.

“When you snatch the pebble from my hand,” Kan would say, “then it will be time for you to leave.”

That time comes when Caine kills a member of the Chinese royal family in self-defence and is forced to travel to the 1870s American Frontier with a price on his head.

Once in the US, Caine begins to search for his lost half-brother Danny, who is wandering the Western countryside.

And so his quest to find Danny and, hence, himself began. He travelled through the Wild West, following up clues to his brother’s whereabouts, and familiarising himself with his new homeland.

He also discovered an intolerant air of anti-Asian racism. In combating that racism, Caine’s martial arts training came into play. When confronted with a thug or bigot that threatened him, he would calmly and with no fanfare dispatch the villain with a flexing of his Kung Fu skills.

There were many unusual things about Caine. Besides being a “Chinaman” in the United States, he spoke very softly and hardly at all, uttering cryptic statements about the nature of being and universal harmony, often flashing back to something he was taught by the Masters (“Remember, the wise man walks always with his head bowed, humble, like the dust.”).

Only when he absolutely had to defend himself would he use the ancient Chinese martial arts instead of modern-day weapons.

Caine was usually a loner, although in the final season, an American cousin, Margit (Season Hubley), began to make frequent appearances.

The star, David Carradine, was responsible for much of the publicity surrounding the show.

A member of a respected theatrical family (his father was legendary actor John Carradine), David dropped out of Hollywood’s glittery world and lived an unconventional life in a rundown old house in the hills, reflecting the same philosophy of mysticism and “oneness with nature” that his character Caine’s represented.