Land Of The Lost

Widowed forest ranger Rick Marshall (Spencer Milligan) and his two children, Will (Wesley Eure) and Holly (Kathy Coleman), are enjoying a rafting trip on the Colorado River when they accidentally fall over a waterfall. 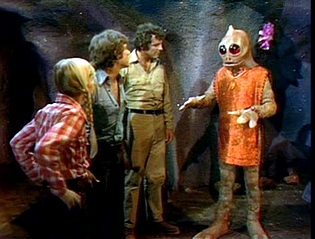 They somehow slip through a dimensional doorway into a closed universe populated by dinosaurs, ape-men (known as Pakuni) and a race of lizard-like creatures (known as Sleestaks) that can’t come out in the daylight and are afraid of fire.

Enik – an intelligent golden Sleestak in an orange disco vest – helps the Marshalls on occasion.

Enik (voiced by Walker Edmiston) came from the past when all Sleestak were intelligent and peaceful and was horrified to see that his descendant were violent (and really unskilled marksmen).

The family set up home in a cave they call High Bluff and are befriended by a young Pakuni boy named Chaka (Philip Paley), whose parents were called Ta and Sa.

The Marshalls make the most of their experience as they try to find a way home for the next two years by using a monolithic pyramid-like chamber known as a pylon which acts as a doorway to other worlds.

Unfortunately, Rick tries to use one of them to try to get back home and disappears (actor Spencer Milligan was allegedly written out due to a dispute over merchandising rights).

In a happy act of synchronicity, Rick’s brother Jack (Ron Harper) – who has been searching for them – lands in the Land of the Lost and joins his nephew and niece in trying to get back home.

Meanwhile, an earthquake destroys the Marshall’s cave and they have to relocate to an abandoned temple.

This live-action Sid and Marty Krofft production featured the talents of some of the greatest sci-fi writers of the time. Theodore Sturgeon, David Gerrold, Ben Bova, Norman Spinrad and Larry Niven all contributed.

The series was later revived briefly in 1991 (a loose adaptation with Timothy Bottoms that lasted two seasons) and for a comedy film in 2009, starring Will Ferrell.