The garden itself was a park-like area with a large tree as its centrepiece. The tree had a little magic of its own, dropping written messages for Carole and Paula and lowering a pair of vines on which they could swing.

Inside the tree lived one of the show’s puppet friends, a pink squirrel named Sherlock. The deep-voiced Sherlock was a bit of a troublemaker, but the hosts could always ply him with a bribe of peanuts, his favourite.

The rest of the puppet cast included a bird named Flapper and the Chuckle Patch, a patch of daisies that delivered a new joke in each episode. When Carole or Paula read the joke, the Patch would shake and giggle with high-pitched glee.

One of the show’s most fondly remembered segments was “The Story Box”. When story time rolled around, Carole and Paula would open up an old steamer trunk and pull out props, costumes and masks to put on a staged version of a children’s story. 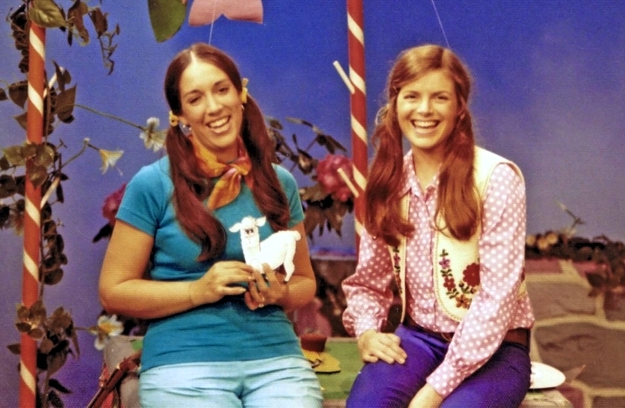 Every aspect of the show revolved around the winning personalities of its hosts. Carole Demas and Paula Janis were the kind-hearted friends every kid wanted, and their two-part harmonies and guitar accompaniment were like chicken soup for the hyperactive soul.

The Magic Garden only aired in local syndication, primarily in New York on WPIX, but it left a lasting impression on those lucky enough to watch it and became the most successful regional show in the history of American children’s television.

Carole Demas continued her distinguished career as an actress and singer in theatre, television and film. On Broadway, she created the leading role of Sandy in the hit musical Grease. She guest-starred on numerous television shows, including Kojak, Mannix, Barnaby Jones, Edge of Night and As The World Turns.