First seen on television on 25 February 1971, Mr Benn lived at 52 Festive Road, London, and was the ultimate Mr Nice Guy in a bowler hat. 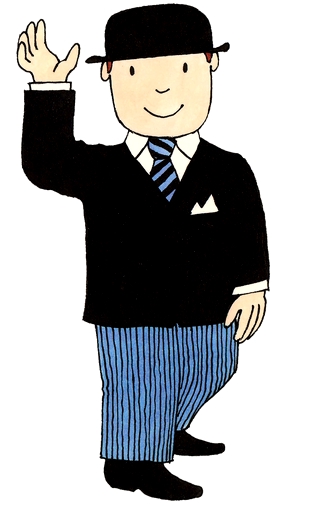 But whenever he entered a mysterious costume shop, (where the shopkeeper always arrived “as if by magic”) and tried on a costume, Mr Benn inevitably stepped out of the changing room (through “the door that always led to adventure”) into a different time and place appropriate to his apparel.

Mr Benn’s first adventure was as a red knight, stepping out of the changing room and into a world where he had to help a dragon.

In subsequent stories, his adventures included him being an astronaut, a big game hunter, a wizard, a pirate and an American Indian. Whether a caveman, a cowboy or a clown, Mr Benn would always come to the aid of some poor unfortunate before the shopkeeper suddenly reappeared to escort him back to the shop.

At the end of each episode, Mr Benn discovered a little souvenir from his adventure meaning the adventure had been real after all.

Created by David McKee and narrated by Ray Brooks, only 13 episodes were ever made, but the series has been repeated on UK television every year since it’s original transmission, making it a children’s favourite over several generations.

A Kick Up The Eighties

Zombies of the Stratosphere