“Magic!” – Bill Maynard starred in this Yorkshire TV sitcom as Selwyn Froggitt, a well-meaning but accident-prone half-witted council worker who first appeared in a single-episode pilot back in 1974.

Selwyn was a deeply jovial man who has somehow deluded himself into thinking that he can fix anything. Unfortunately, the reverse was true.

While daytime found Selwyn working for the Department of Public Works (as “the best hole digger in Yorkshire”), evenings found him with a copy of The Times tucked under the sleeve of his donkey jacket, down at the Scarsdale Working Men’s Club and Institute where, foolishly, the committee had appointed him as secretary.

Most of the series humour was generated at two locations; At the club, where Selwyn drank pints of ‘cooking’ with a bag of nuts and his well-intentioned problems were felt most keenly by the barman “our Raymond” and drinking regulars Clive, Jack and Harry; and at home, where Selwyn exasperated his ever-loving mother (“me mam”) and his brother, (“our Maurice”) whose girlfriend – and later, wife – was the much-married Vera Parkinson.

The role of Selwyn Froggitt was fashioned especially for Bill Maynard, who came up with the idea of an uncouth but bizarrely cultured character, and the show soon attained great popularity while Froggitt’s catchphrase – “magic”, uttered while sticking up both thumbs – contributed to the popular vernacular of the era.

The series was filmed in Skelmanthorpe, a West Yorkshire village at the foot of the Pennines between Huddersfield and Barnsley. 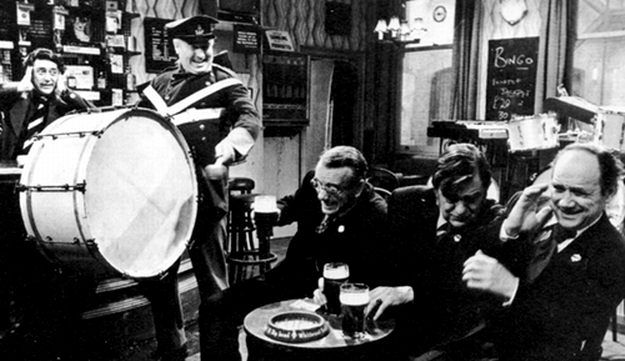 Bill Maynard reprised the character in 1978 in the series simply titled Selwyn, with the hapless Froggitt now working as the Entertainment Officer at Paradise Valley, a Butlin’s-esque holiday camp in Yorkshire (he had seen the job advertised in The Times).

TRIVIA
The change of setting from Scarsdale to a holiday camp may well have been suggested by Maynard. As Billy Williams, he had made his professional stage debut at Butlin’s Skegness in 1951 as support to Terry Scott.

Three-Fifths of the World Loves a Lover | We Are the Masters Now | There Are Several Businesses Like Show Business | The Grand Outing | The Master Builder | Ladies’ Desire || Daze of Hope | The Game of the Name | Raffles | Selwyn Rides Again | Alphabetic Orders | The Protection Racket | Just Cause and Impediment || Be It Ever So Humble, There’s No Place | Gala Performance | Boom Boom | Occupational Hazard | Sling Along with Selwyn | A Little Learning | Around the Houses | On the Feast of Selwyn