Pennies From Heaven – a six-part drama series written by the late, great Dennis Potter – received great popular and critical acclaim, including the BAFTA Award for Outstanding Drama, when it was first transmitted on BBC TV in 1978.

This was the first serial drama by Potter after some 16 single television plays, anticipating in its format and mixture of popular music and dance sequence such later works as The Singing Detective (1986) and Lipstick On Your Collar (1993).

Potter’s ironic handling of music and dance in the television serial was a landmark in British television and his own career.

He uses these forms of expression to both disrupt the naturalism of the narrative and to show unconscious desires of individuals and of society (the 1981 MGM feature film version failed to capture the seamless flow from conscious to unconscious desires, treated the story as a conventional musical, and was a flop). 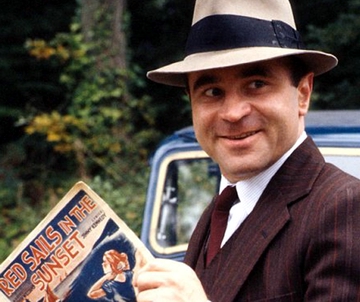 The play tells the story of Arthur Parker (Bob Hoskins), a bun-faced sheet-music salesman in 1930s Britain who is frustrated by his frigid wife Joan (Gemma Craven), and the deafness of the shopkeepers to the beauty of the songs he sells.

Arthur continually asks himself why the harsh realities of his life cannot be more like the kind of existence portrayed in the words of his songs.

Although Arthur is an adulterer, and a liar – and is weak and cowardly – he really wants the world to be like the songs.

He connects the beauty of the songs with his sexual longings when he falls in love with a young Forest of Dean school teacher, Eileen (brilliantly played and danced by Cheryl Campbell).

When she becomes pregnant she has to abandon her teaching career and flee to London where she takes up prostitution to earn a living.

After making contact with Arthur once more, she abandons her pimp, Arthur abandons Joan and they set off for the country for a brief experience of happiness.

The rural idyll is breached by two murders: Arthur is wrongly pursued for the rape and murder of a blind girl (Yolande Palfrey), and while seeking a hideaway from pursuers, Eileen murders a threatening farmer. The two return to London where Arthur is apprehended, charged and hanged for the blind girl’s murder. Eileen, significantly, is not pursued.

The disturbing realities which punctuate the narrative – rape, murder, prostitution, and the grinding poverty of the Depression-era – are counterbalanced by the naive optimism of Arthur expressed through the sentimental love songs of the period. 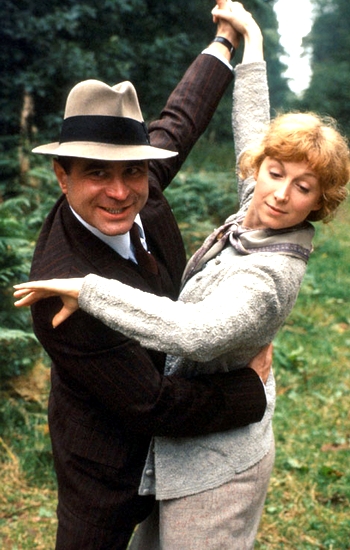 Daydreams and reality are constantly juxtaposed but Potter does not provide easy evaluations. It is possible to laugh at the simplicity of Arthur’s belief in the “truth” of the popular love songs he sells but scorn the shallow cynicism of his salesmen companions.

Arthur’s naiveté has to be balanced against his duplicity: although he loves Eileen and promises to help her, he scribbles down a wrong address and creates enormous complications for them.

Yet, however, sentimental the songs are, they point to a world of desire that, in some form, human beings need and which is otherwise unrecognised in popular discourse.

Although Potter used popular music and Busby Berkeley type choreography, Pennies is not a conventional musical: the music is not contemporary and thus arrives with a freight of period nostalgia.

Moreover, the music is dubbed and the actors lip-synch (on occasion across gender lines) so that the effect is comic or ironic as well as enticingly nostalgic.

If the songs and dance routines are used to express unconscious desires or those beyond the characters’ ability to articulate, another device which provides access to the unconscious and interferes with any naturalistic reading is the use of doubles.

Arthur and the accordion man (Kenneth Colley), Joan and Eileen, though physically and in class terms distinctly different, are potential versions of the same identity. While the accordion man is presumed to have raped and killed a blind girl (significantly, not shown), Arthur’s barely suppressed wish to rape her shows his equivalence.

Similarly, Joan and Eileen, though opposites in terms of sexual repression share a similar shrewd awareness of social reality. The main difference is that Eileen is led to defy social conventions while Joan is content to work within them, recognising their power.

Arthur’s limited understanding is compensated for by his naive passion for music and love which offers a truth about how the world might be.

Potter was worried about the degree to which scenes would be censored by the BBC (eventually they removed a full-frontal male nude, Gemma Craven’s nipples and a four-letter word) but he had a ready excuse if the series had been banned . . .

He stipulated that the records used were by Al Bowlly, Harry Roy and others – not by Billy Cotton’s band. “I’ll put it about that the BBC1 Controller Bill Cotton was upset that I didn’t use any of his dad’s numbers” he joked.

Part of the series was filmed in Potter’s actual junior school in Berry Hill in the Forest of Dean with children at desks breaking into song. When the parents and teachers were shown the finished product there was uproar. You can see their point – but 12 million viewers followed Arthur and the series put Al Bowlly and company back in the charts, outselling punk records.

The soundtrack LP sold 50,000 copies in six weeks, and a second record was produced.