Home Television Comedy Seven Of One

This series of one-off stand-alone comedies featuring the inimitable talents of Ronnie Barker, was originally to have been called Six Of One, leaving the way open for a follow-up series to be called Half A Dozen Of The Other. So much for that gag . . .

Instead, it led to two of the most enduring of television comedies – Open All Hours (which featured as the first of the seven stand-alone comedies) and Porridge (which was born of the second – Prisoner And Escort).

The other, now forgotten, five shows were My Old Man (about a pensioner trying to save his home from a demolition crew), Spanner’s Eleven (which told the tale of ailing football team, Ashfield), One Man’s Meat (which saw Barker as a man forced to go on a starvation diet by his wife), Another Fine Mess (which teamed the star with Roy Castle as two Laurel and Hardy impersonators) and finally I’ll Fly You For A Quid (a story about a Welsh family who bet on absolutely everything and anything).

The ease with which Barker could slip in and out of characters as diverse as the hard-edged prison lag Fletcher and the ageing northern shopkeeper Arkwright was proof enough that this man should star in his own series. 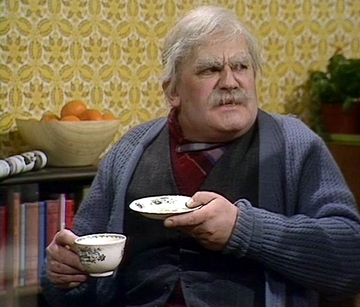 Thankfully we got more than our money’s worth, with two of the all-time great British comedies appearing as a result of Seven Of One.

My Old Man was also developed as a comedy series in 1974 and 1975. The series starred Clive Dunn in the role originally played here by Barker.

Seven Of One was the third series in which Ronnie Barker appeared as a different character each week. The previous two were The Ronnie Barker Playhouse (1968) and Six Dates With Barker (1971).

Can We Get on Now, Please?

1 9 8 0 (UK) 6 x 25 minute episodes ITV scored a hit with this very funny series from Granada Television which unfortunately ran for only...