Captain Marvel burst onto the comic book scene in the second issue of Whiz Comics (published by Fawcett Comics) in February 1940, with his heroic innocence combining strength, courage and wisdom.

Over the next 12 years, Captain Marvel enjoyed immense success in such comic books as Captain Marvel Adventures, America’s Greatest Comics and Marvel Family. But in the early 1950s, Fawcett decided to discontinue their comics line. 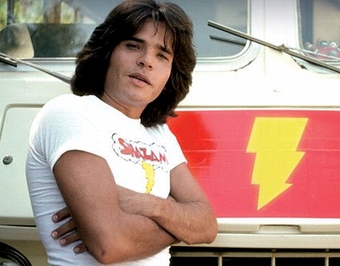 DC Comics had earlier filed a suit accusing the company of blatantly ripping off Superman. Fawcett finally agreed they could only publish future issues of Captain Marvel with DC’s permission. In 1972, DC Comics revived the character themselves, under the title Shazam!. Ironically, the magazine’s first issue featured Superman and Captain Marvel on the same cover.

Around the same time that the new Shazam! comic debuted, Filmation Associates (producers of the 1960s animated Superman, Batman and Aquaman series) was trying to bring a new look to Saturday morning television.

They had originally considered producing Shazam! as a cartoon, but then decided to film the show as live action adventure.

In order to make live action work, Filmation dropped most of the fantasy elements, having teenage radio reporter Billy Batson and his ageless guardian, Mentor, now travelling across America in an RV helping problem youngsters. 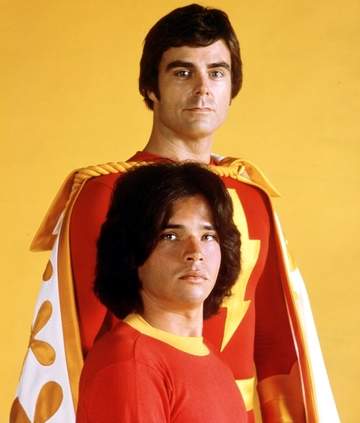 Whenever their help was needed, a flashing light on the dashboard of the RV would start beeping and blinking which would summon the Elders (Solomon, Hercules, Atlas, Zeus, Achilles, and Mercury), who would give Billy some cryptic advice needed for the emerging situation.

The six Elders trained Billy with their respective special gifts: wisdom from Solomon, super strength from Hercules, stamina from Atlas, power from Zeus, courage from Achilles, and speed from Mercury.

By yelling the word, “SHAZAM” (an acronym of all of the Elders’ names) Billy could turn into Captain Marvel, an adult superhero with the power of flight, super speed, and super strength.

As Captain Marvel, he would use his powers to capture criminals, save those in distress, and right any other wrongs that came up. 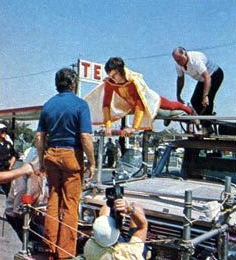 To show Captain Marvel flying, Filmation strapped Jackson Bostwick to a diving board atop a truck. As the truck drove down an empty road, the camera shot only the half of Bostwick in front of the board.

When Captain Marvel leapt into flight, Bostwick would run onto a springboard, catapult over the camera and land safely on a wrestling mat.

For Shazam!‘s second and third seasons, Captain Marvel’s flights were created optically with a matte, with John Davey suspended in the studio.

When the TV series proved successful, DC Comics incorporated some of the show’s themes into the Shazam! comic book. In Shazam! #26, Sterling Morris (Billy’s boss at station WHIZ) assigned Batson to tour America producing specials on young people. The old wizard ordained the decision and let a moustached Uncle Dudley become Billy’s chaperone, driving the boy’s van and taking care of him. 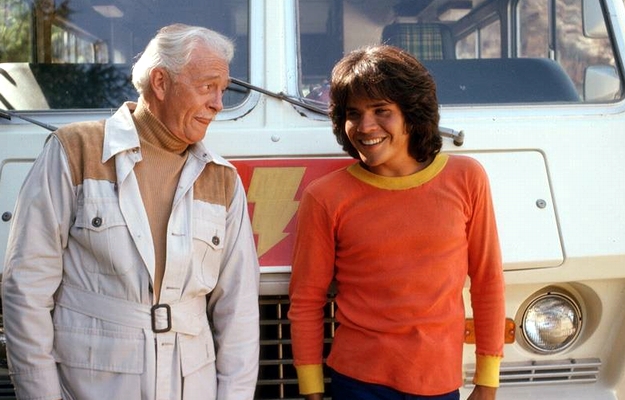