The continued allegiance of Australian TV aerobicists to hi-energy disco music is a wonderful thing. Long after the rest of the world moved on from Hazel Dean and her fine works (!), June Jones and her five maximally-gluted assistants still strutted their stuff to this relentlessly upbeat, 90-beats-per-minute music. 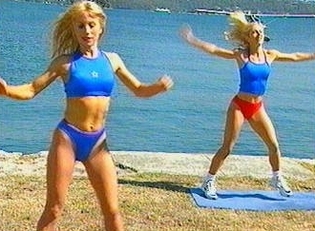 This 30-minute show from Channel Ten aired at 6:30 am on weekdays.

The series was produced by Harry Michaels, who had starred in the high rating 1970s soap Number 96 as assistant shopkeeper Giovanni Lenzi.

Michaels’ stunning wife, Effie, appeared onscreen as one of the main aerobics demonstrators for several years.

“One mambo! Square shave! Grapevine right! Squat down strong! Pump it up!”