Brass (meaning, of course, money) was a splendidly over-the-top pastiche of the gritty northern mill dramas that have proliferated on British TV (and radio, stage and screen) for eons.

Like a cross between Soap and When The Boat Comes In, the series was set in the fictional Lancashire town of Utterley (location shooting took place in Ramsbottom, near Manchester) in the 1930s, when men were men and ferrets were something you stuffed down t’trousers.

Brass depicts the lives of two families at opposite ends of the social spectrum. One is the wealthy Hardacres living in the big house at the top of the hill. The other is the Fairchilds. Employed by the Hardacres, they live in a tiny back-to-back terraced house away down at the bottom of the hill. Despite the differences in class and wealth, however, plenty of sexual intermingling takes place.

The series was not played for laughs as such, but by its very deadpan straightness, it drew rich humour out of the situations.

Another source of fun was in the names given to certain characters: the two Hardacre sons were Austin and Morris, other people were named Job Lott, Lords Mountfast and Sodbury, Schickelgruber (Hitler’s birth name), Von Beckenbauer, Sgt Pepper, Young Scargill, Hattersley and (ironically, considering what he did for the miners in 1993) Heseltine.

But these people were the small fry. The big fish in the pond was undoubtedly Bradley Hardacre, owner of the coal mine, the cotton mill, shipyard, aircraft factory and much else – even the munitions factory.

He has scraped his way out of the workhouse and into the Rolls-Royce league, but he hates his old background – the working classes – with a vengeance and forces them to work for him in appalling, risky conditions.

Hardacre didn’t only get to t’top by graft, nay lad – he won ‘social standing’ by seducing a baronet’s daughter into marrying him. She, in turn, was hungry for a share of his self-made lucre.

Now Lady Patience Hardacre is self-pitying and gin-dependent. Their marital relationship is a disastrous sham; indeed, to ward off any unlikely attempt by her husband at pursuance of his marital rights she has convinced him that she must remain confined to a wheelchair, whereas, in reality, she is a walking – if loopy – cauldron of desire.

Before her denial of the conjugals, Lady Patience delivered to Bradley two daughters and two sons. Red-headed Isobel is promiscuous to the extent of nymphomania. She eventually marries an ageing lecher, Lord Mountfast.

Mousey-haired Charlotte is an idealist who has a social conscience and likes to help the local hospital doctor (MacDuff), sometimes ripping off her blouse to patch up the injuries inflicted upon her father’s workers in the course of their employment.

Austin is ambitious but constantly thwarted by his father while Morris has a zest for life, lights and teddy bears, and – horror of all horrors – is homosexual, attending Cambridge with his chums Kim, Guy and Morris.

Turning to the Fairchilds, George – nominal head of the house – is a flat-capped working-class fool. Immensely grateful to Hardacre for providing gainful employment, he won’t hear a bad word said about his boss.

His wife Agnes is a sexual object for Hardacre, but she also fires up her two sons to revolt against their downtrodden working-class existence and leads a strike against Hardacre’s working practices. A bold feminist, Agnes exudes a magnetic, if earthy, sexual attraction, helped no end by her ever-revealing cleavage.

George and Agnes have had two sons. Jack, the elder, works at the coal mine and is admired by his pals for his defiant attitude.

Matthew, more reflective (he writes poetry in secret, which attracts him to Morris) is a clerk at Hardacre’s mill but yearns for a different life – After he’s murdered Hardacre, that is!

The third series of Brass, aired in 1990 after a six-year gap, kicked off on September 1 1939, at the dawn of WWII. Austin is an MP, working with Neville Chamberlain; Morris has become a Russian spy under the guise of a vicar in Mayfair; Isobel has been widowed and continues to feed her gluttonous diet for men; Agnes is a socialist MP; Charlotte has married Matthew – she is a pacifist working for PAP (Peace at Any Price) while he has joined the RAF – and tough-as-boots Bradley Hardacre, mindful of the aircraft and munitions he can supply the British government, is desperate for the war to start -“I’ve worked for it and I want it!”. 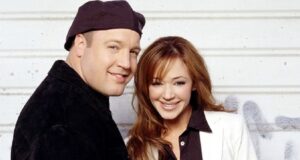 Only When I Laugh

1 9 7 7 (UK) Nicknamed "The Most Expensive Story Ever Told", Jesus of Nazareth cost around £9 million to make and was screened on ITV on Palm Sunday and Easter Sunday in 1977. Lord Lew Grade said at the...