Aussie drama series The Flying Doctors made ordinary soap heroes seem like such wimps. This lot saved lives constantly while risking their own. They had the Queen on their side after all – it’s the ROYAL Flying Doctor Service.

The show was set against the backdrop of the awesomely isolated Australian outback and the charms of Coopers Crossing, the sort of small friendly town stuffed with characters that no warm-hearted Australian series can do without. And it’s real too – there are Flying Doctors, just like them. Well, sort of . . .

It began as a one-off mini-series in 1985 and the response in Australia and overseas was so strong that a regular series was launched in April 1986. 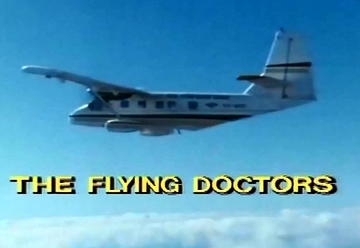 In July 1988 it landed in Britain and UK viewers took it to heart as a partner to Neighbours (even if the kitchens weren’t so well equipped).

The main character at the start (and in the mini-series) was Dr Tom Callaghan who had been running the RFDS alone. In the first episode, a second doctor arrived – Chris Randall. She soon proved herself dedicated and capable, but also for the conservative township of Coopers Crossing, decidedly female.

Her gender wasn’t the problem with Dr Frank Turner (who was in charge of the local hospital). He disapproved of all flying physicians, and there were frequent conflicts between them.

Boyish, down-to-earth nursing sister Kate Wellings was a favourite from the start. The first pilot was flamboyant, woman-mad David Gibson. Prickly property tycoon George Baxter was the local man to hiss at.

Would be genteel shopkeeper and town gossip, Violet Carnegie was also a great favourite of viewing audiences.

Bellbird star Maurie Fields and his real-life wife Val Jellay established themselves from episode 1 as the public-spirited publicans Vic and Nancy Buckley. Pretty blonde New Zealander Rebecca Gibney arrived after six episodes as garage mechanic Emma Plimpton and took a shine to pilot Sam Patterson as soon as he arrived at the start of the second season.

Other popular characters were Sharon, the Aboriginal receptionist, and the hard-working radio operators, especially Demetris who thought he was a radio DJ, sometimes rather worryingly. 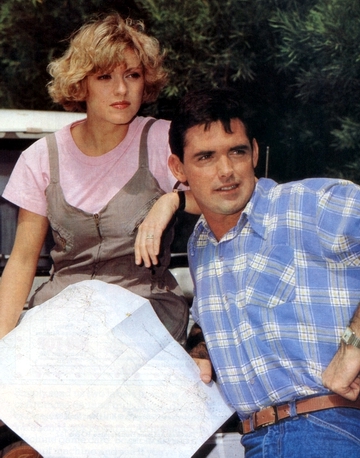 The Flying Doctors regularly tackled “issues” while providing fast action (such as a mining explosion) but the writers never resorted to anything too far-fetched.

But perhaps the greatest appeal of the series was the large number of fledgeling romances (it was called  “sexual tension” in 80s soap-speak), none of which really grew to full strength (that was called “unresolved sexual tension”).

In the case of our heroes, it was the promise of sex (or) because the natural urges of poor Dr Geoff Standing and his feisty nurse, Kate Wellings, were permanently on hold.

But not all the cast were sexually frustrated. Emma the mechanic and Sam the pilot were allowed to fancy each other, fall in love and marry and Dr Randall was allowed to fall for a visiting geologist who became her patient.

The Flying Doctors was Australia’s most expensive television drama at the time, costing around $200,000 an hour-long episode, primarily because it was shot entirely on film.

The small town of Minyip near Horsham, Victoria, became Coopers Crossing for several months and many of the locals were seen as extras in the series.

Falling ratings and departing actors led to a revamp of the show in 1993 when it returned simply as RFDS. Maurie Fields, Sophie Lee and Val Jellay were carried over into the new production, which moved from Coopers Crossing to Broken Hill.

RFDS ran for only 13 episodes.

Wheelie and the Chopper Bunch

Adventures of Twizzle, The

All Gas And Gaiters