Helping with the kids – Simon (Paul Smith initially and then Christopher Mayer), Debbie (Simone Buchanan) and Jennifer (originally Sarah Monahan and – from 1993 – Angela Keep) – was ditzy Betty Wilson (Julie McGregor) one of his late wife’s country cousins from Walgett who had the IQ of a teacup.

Betty could cook up a storm – which endeared her to the children – but as a secretary to Martin, she was less than hopeless.

The series was sold to over 20 countries worldwide and dubbed into several different languages, proving highly popular in Germany, France, Spain, and throughout Asia.

Robert Hughes left the show in 1994 after 260 episodes, leaving the family “Dadless” (it was explained that Martin had taken a $300,000-a-year job in Saudi Arabia).

Mark Owen-Taylor was introduced to the cast as Greg Russell, an architect friend from Adelaide who moved into the house to mind the Kelly clan and become a kind of surrogate father, bringing his own teenage daughter Tracy (Belinda Emmett) to join the family.

Australia’s longest-running sitcom was finally cancelled in July 1994 after 291 episodes.

The show was filmed concurrent to Hey Dad! and revolved around four young flatmates looking after a baby in a block of flats with the help of their next-door neighbour (Betty) who helps them keep the baby secret from their landlord, Mr Colloudos, a Greek immigrant with a strict “no babies in the building” rule .

In March 2010, regular cast member Sarah Monahan claimed she had been molested on set several times during the production of the series by the show’s lead actor, Robert Hughes.

Simone Buchanan and Ben Oxenbould both came forward in support of Monahan’s allegations towards Hughes. Hughes denied the claims. 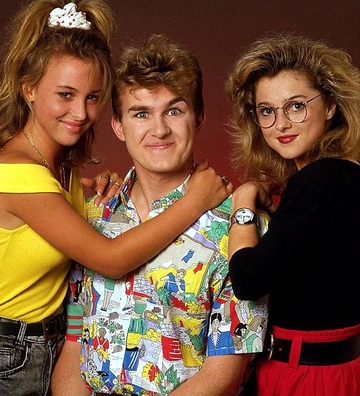 Police investigated the claims, interviewing over a hundred people (but not Hughes). In March 2011 Monahan announced that she intended taking civil action against Hughes and television station executives.

Hughes was arrested in London in August 2012 and after being extradited to Australia, he was charged with 11 counts of child sexual abuse and released on bail.

His trial started in February 2014, and in April 2014 the jury found Hughes guilty of two counts of sexual assault, seven counts of indecent assault and one count of committing an indecent act.

On 16 May 2014, Hughes was sentenced to 10 years and 9 months imprisonment with a minimum non-parole period of 6 years. He was denied parole in March 2020.