This BBC sitcom written by Jimmy Perry and David Croft (Dad’s Army and Some Mothers Do ‘Ave ‘Em) was set in a typical British holiday camp in the late 1950s and early 1960s.

The show was quite obviously modelled on Butlin’s or Pontins holiday camps with the legendary redcoats replaced in the series with yellowcoats. Perry had indeed once served as a Butlin’s Red Coat.

The pilot episode set the scene, with the entertainers returning for the 1959 holiday season only to find that the Maplins holiday camp at Crimpton-on-Sea now being run by a former college professor, the well-meaning but dreamy academic Jeffrey Fairbrother (Simon Cadell). 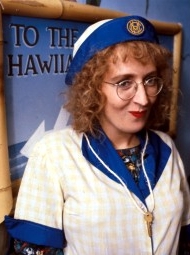 Fairbrother was a Cambridge archaeologist who decided to seek pastures new when his wife left him. His assistant was valleys girl Gladys Pugh (Ruth Madoc) who also served as Radio Maplin announcer, rousing campers from their slumbers with a lilting “morning campers”.

Fairbrother instantly warmed her frigid heart, although her smouldering advances were never welcomed.

Always in the background, issuing edicts (but never showing his face) was the all-powerful but illiterate boss, Joe Maplin.

Two years later, Kenneth Connor joined the regular cast as the children’s entertainer Uncle Sammy, who seemed to have a strange hold over Joe Maplin, but otherwise, things continued much as before, with the 1959 holiday season eventually giving way to the 1960 holiday season.

Unfortunately for real-life holiday camps who were trying to live down their primitive past, the series – filmed at the real Warners Holiday Camp in Dovercourt near Harwich – was a huge hit and ran for eight years. Action centred on the glorious coarseness of everyday holiday camp life. In the daytime, campers gathered around the swimming pool to witness beauty contests and various slapstick competitions. In the evening they repaired to the Hawaiian Ballroom to be entertained by Ted’s vulgar jokes and Spike’s silly costumes.

Nostalgia was the prime key to its success, but so was authenticity. Plots became somewhat outlandish during the latter episodes – there was even a murder mystery when Mr Partridge was found dead in the camp – and by the time the BBC called it a day in 1988, it is arguable that the series had already outstayed its welcome by a good couple of years.

Many of the cast returned for Croft and Perry’s spoof of Upstairs Downstairs, You Rang M’Lord, and the Croft and Spendlove railway sitcom, Oh, Doctor Beeching!