Set in suburban Chicago, Married With Children was a parody of American television’s tendency to create comedies dealing with perfect families a la The Cosby Show – which was coincidentally the top-rating TV show in the US when MWC premiered in 1987.

The creators of MWC had previously produced The Jeffersons, a long-running comedy about a black entrepreneur who becomes wealthy and moves his family to an almost all-white New York City neighbourhood. This time they presented patriarch Al Bundy, chauvinist and failed shoe salesman, whose family motto was “when one of us is embarrassed, the others feel better about ourselves.” Al Bundy (Ed O’Neill) hated fat women, tried to relive his days as a high-school football hero, and did almost anything to avoid having sex with his housework-shy, chain-smoking spouse Peggy (Katey Sagal) – whose maiden name is Wanker.

Pegg’s clothes were too tight, her hair too big, make-up too thick, and heels too high, and she wanted sex as much as Al wanted to avoid it.

She also loved to shop (her ability to buy always exceeding Al’s capacity to earn), and refused to cook so the Bundys had to take desperate measures in order to eat (frequently searching beneath the sofa cushions for crumbs of food).

Kelly could never manage to find the right word and her verbal confusions were hilarious: “Remember, attraction is a three-way street. Or is it a one-way tunnel? Hmm, in any case, I do know it’s a four-lane highway, but it takes two to use the car-pool lane”.

More importantly, she had tremendous hooters and would seemingly have sex with any available male. In one episode she acquired backstage passes to a rock concert and announced she was “just one paternity suit away from a Caribbean home”.

The Bundy’s thought Bud had no chance of ever attracting a date, and running jokes mentioned his collection of pornographic magazines (Big ‘Uns) and blow-up rubber women. The other continuing characters in MWC were the upscale next-door neighbours, Jefferson (Ted McGinley) and Marcy D’Arcy (Amanda Bearse).

Marcy and her husband served as a device to entice and challenge the Bundy clan, then put them down.

Marcy was a Loan Officer at the Kyoto National Bank and an activist for almost any cause. She married Jefferson while drunk – at Clyde’s No Blood Test Needed Chapel – and discovered him in her bed the next morning. He had no career, although he had claimed to be a clever criminal now living in the witness protection programme. Marcy’s first husband, Steve Rhoades (David Garrison), also made frequent guest appearances.

The show had a history of arguments with the censors – hardly surprising as episodes focused on sex, crime and anti-family values.

An episode entitled ‘Her Cups Runneth Over’ later caused a stir. The programme told of Peggy’s need for a new bra, which coincided with her birthday. Al and Steve travelled to a lingerie shop in Wisconsin where an older male receptionist wore nothing below the waist but women’s panties, a garter belt, stockings and spike-heeled shoes.

Steve fingered leather-fringed falsies attached to the nipples of a near-naked mannequin and women flashed their T-Shirt potatoes at Al and Steve (though the nudity was not shown on camera). One US viewer, suburban Detroit housewife Terry Rakolta, took offence at the show after the bra episode, complaining that both the language and partial nudity were unacceptable for viewing during a time when children made up a large portion of the audience.

She acted by writing to advertisers and asking them to question the association of their products with Married With Children‘s content. She also brought her argument to national television news shows (including Nightline, Good Morning America and Today), saying;

“I picked on Married With Children because they are so consistently offensive. They exploit women, they stereotype poor people, they’re anti-family. And every week that I’ve watched them, they’re worse and worse. I think this is really outrageous. It’s sending the wrong messages to the American family”. Regardless, by 1989 the show was winning its ratings slot consistently, and by 1995 had become the longest-running situation comedy on US network television, on the air as long as the classic comedy Cheers.

In 1991, due to Sagal’s actual pregnancy, the producers decided to have both Peggy and Marcy become pregnant. When Sagal lost her baby during pregnancy, the plot of MWC changed and Peggy’s pregnancy was revealed to have been one of Al’s nightmares.

“You know what I would do if I was President? I’d take a big empty state, that nobody’s using, y’know, like Idaho, and I’d pack every pregnant woman in the country into donut trucks, and convoy ’em all to Boise. And since Idaho means nothing anyhow, I’d change the name to Preg-naho”.

In 1992, the six-year-old son of one of Peggy’s cousins moved in with the Bundy family, but the character disappeared after a few months with no explanation.

Also in 1992, Kelly got a job as a waitress in a diner and Bud began attending college and got a part-time job as a driving tester for the Bureau of Motor Vehicles. 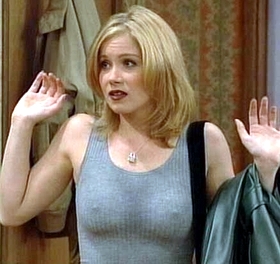 MWC helped put Fox on the network map and, in return, it enjoyed a 10-year lifespan, running from April 1987 to July 1997, well after Rakolta launched her crusade and got her name in so many papers.

Executive producer Pamela Eells pointed out before the launch of the 1996 season, “the audience at home never hears the funniest stuff [on other shows] because it’s either too crass or too outrageous or too silly. On this show, it all goes in”.

Ultimately the jokes became routine and expected, even though still funny, but the show has had an extremely lucrative afterlife in daily syndication, running strongly for years in many markets, both in the USA and overseas. After all . . . who will ever forget ‘The Bundy Bounce’?