The pulse and rhythm of a glamorous resort city was set against the seamy side of the drug underworld in this action series, which made use of rock music and music video in a manner previously unprecedented on TV.

Taking its direction from a two-word memo from NBC boss Brandon Tartijoff – “MTV cops” – the show was a triumph of sound and vision over narrative content, and cast two relative unknowns in the starring roles. 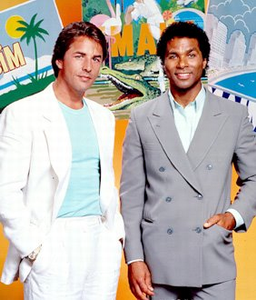 Ricardo Tubbs (Philip Michael Thomas) was an ex-New York street cop who had come to Florida to find the drug dealer who murdered his brother.

They were an unlikely – but very effective – team, working undercover on the upscale Gold Coast and the seedy alleyways that made Miami a city of contrasts.

They were often seen speeding around town in Sonny’s black Ferrari Spider which was later upgraded to a state-of-the-art white Ferrari Testarossa.

Lt. Castillo was their uptight superior. Gina and Trudy were a pair of female undercover officers. Stan and Larry were Crockett and Tubbs’ more traditional backups.

Sonny’s co-workers changed during the years: his original partner in the pilot (played by Jimmy Smits) was killed, as were his backup, Zito, and his original superior, Lt. Lou Rodriquez. Even his original Ferrari was blown up accidentally at the beginning of the third season.

This stylish, MTV-influenced series was a smash hit and transformed struggling actor Don Johnson into a major sex symbol in the mid-80s.

His expensive pastel sports jackets worn over a T-shirt, with a stubbly beard and no socks started a fashion trend for those into the rugged, macho look.

Most of the female characters on the show swooned over him. Sonny’s estranged wife, Caroline, and his young son were rarely seen, and later in the show, his new bride Caitlin Davies (singer Sheena Easton) was an infrequent guest.

A multi-part story in 1988 had Sonny believing he was really his drug-dealing undercover alter-ego, Sonny Burnett, forcing partner Tubbs (who was Rico Cooper undercover) to bail him out.

The show attracted many famous celebrities not normally seen in TV acting roles to do cameos, including singers from the 1950s to the 1980s such as James Brown, Ted Nugent, Phil Collins, Little Richard and The Fat Boys.

Watergate felon G. Gordon Liddy made an impression in the role of sneaky Capt. Real Estate, and other celebs included Tommy Chong, Lee Iacocca, the President of NBC-TV (as a bartender), Roberto Duran and Don King.

Despite great ratings and widespread popularity with viewers, the show topped the hate list among real American lawmen who had to wear tatty jeans to chase crooks, not flashy $400 suits.

Gerald Avenberg, head of the 21,000-strong Association of Chiefs of Police, objected to the series giving the image that drug-dealing was a ‘great career’.

In the UK, the show also fell foul of the BBC when Michael Grade rejected four episodes (one was about an IRA terrorist) on the grounds that they were too violent.

He may have had a point: In one series alone Crockett killed 32½ bad guys and Tubbs bagged 13½ (they both shot the same cocaine dealer) whereas the genuine Miami police were responsible at the time for only about eight deaths a year.

Crockett and Tubbs could pass that tally on a good night . . .

1 9 7 4 (UK) 3 x 50 minute episodes A three-part BBC2 miniseries based on the (autobiographical) novel by British author W. Somerset Maugham about Rosie (Judy Cornwell), a barmaid with a heart of gold, and her...

1 9 7 7 (UK) 5 x 30 minute episodes Little Poll Greengrass (Lucy Durham-Matthews) and her brother Theo (Ben Bethell) move from suburban London with their mother (Anne Stallybrass) to their aunt's farm in Norfolk after their...