This crime drama series was based on the novels by Mickey Spillane and featured the cases of tough New York Private Detective Mike Hammer (Stacy Keach) – but unlike in the 1958 – 1959 series starring Darren McGavin, this time, Hammer was a Vietnam veteran.

His investigations into the underworld, among drug-pushers, murderers, kidnappers and other such salubrious characters were glossily depicted. 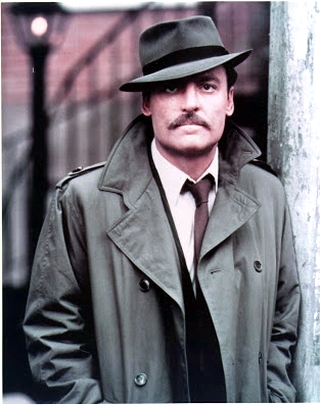 Assisted by his buxom secretary Velda (Lindsay Bloom), the chain-smoking Hammer could also call on the help of his old friend Pat (Don Stroud), a captain in the New York Police Department.

He had several contacts on the streets, including informer Ozzie the Answer (Danny Goldman), and among the parade of shapely females on display was Jenny (Lee Benton), the bartender at Hammer’s regular drinking hole, the Light ‘n’ Easy Bar.

The most intriguing character, however, was a beautiful brunette known as The Face (Donna Denton). Hammer caught sight of her in nearly every episode but never managed to meet her. Finally it was revealed that she was a writer looking to use his exploits as the basis for a series of novels . . .

The series came to an abrupt end following Stacy Keach’s conviction and imprisonment in Britain on drug-related offences. He spent time in Reading jail but returned to his Hammer role in 1997 in a short-lived series entitled Mike Hammer: Private Eye.