This sketch show – which was spun-off from long-running Scottish radio series Naked Radio – directed much of its mockery at Scotland, but its parodies of popular culture and satirical attacks on British and international politicians translated well to a wider audience. 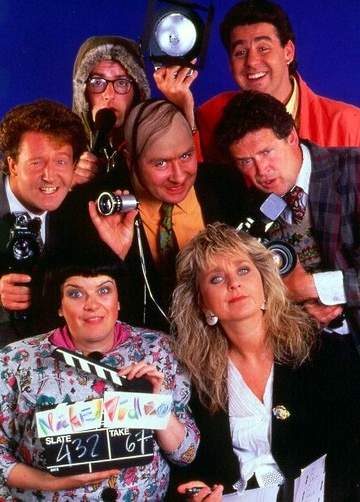 A spoof news desk presented by Gray and Lederer was replaced by Fisher’s brilliant turn as Gus, news anchor at the Outer Hebrides Broadcasting Corporation.

The material was variable, but when it hit the target Naked Video was very funny, with a recognisable debt to Not the Nine O’Clock News and similar anti-establishment credentials.

Naked Video dealt mostly in caricature, most successfully with Fisher’s Rab C Nesbitt, a perpetually outraged Glaswegian drunk and amateur philosopher who proudly described himself as ‘scum’. Rab eventually got his own show, Rab C Nesbitt.

It was Sparkes, though, who provided Naked Video‘s most fully-rounded character in the shape of his creation Siadwel, a hopeless young man who deludedly fancied himself a poet.

Despite his inept verse, Siadwel’s monologues were brimming with pathos, cheerfully delineating his weekly depressions and humiliating encounters.

By the late 1980s, Margaret Thatcher and her Tory colleagues were hate figures in Scotland and Naked Video targeted them regularly. It was not unusual for an edition to feature three or more sketches directed against them. Attacks on Scotland’s alcohol consumption, religious divide and cultural history brought some of the biggest laughs, although such references may have been lost on non-Scottish viewers.