This Australian soap opera revolved around twins Angela Hamilton (Ally Fowler) and John Palmer (Peter Phelps) who are separated at birth and meet twenty years later after growing up in different cities and circumstances. 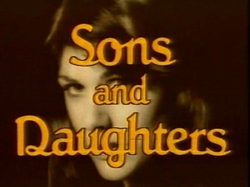 The Hamilton’s (from Sydney) are worth mega-bucks but torn apart by family conflict while the Palmer’s (from Melbourne) are a typical family of Aussie battlers, doing it hard in the cheaper part of town.

Viewers were able to hiss happily at spoiled rich boy Wayne Hamilton (Ian Rawlings, pictured below), who almost ruined his father Gordon (Brian Blain), mistreated women, was remorseless in his business dealings and openly hostile to his younger sister, Angela. 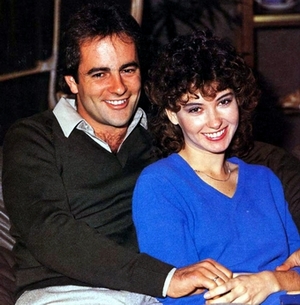 As well as the regular cast (which was large enough anyway) there was a large transient population sharing the trials and tribulations. More than 2,000 actors appeared during the series’ six years, many well known from other Aussie soaps, such as Division 4‘s Terence Donovan, Judy Nunn from The Box and Abigail (fully clothed this time) from Number 96.

But the rock in this sea of changing faces was Aunt Fiona, the guest-house owner who raised baby John for his father, knew all about all and was the shoulder for every main character to cry on.

When poison Pat was scheming and deceiving, Fiona alone knew the truth. For actress Pat McDonald – much loved as scatty Dorrie Evans, caretaker of the flats in Number 96 – this sophisticated lady with a shady past (she once ran a brothel) was a contrast.

Where Dorrie could keep a secret for about two seconds. Fiona had to be worldly, wise and silent for years on such matters as who was parent to whom. For a while, one of Fiona’s lodgers was ex-hooker Jill Taylor. The two were sisters under the skin and it was shown. 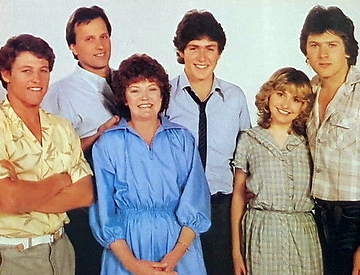 The undoubted queen of Sons and Daughters though was the wife and mother no one deserved – bitchy Pat Hamilton.

British-born Rowena Wallace established the character as the iron-fisted roost ruler, ranting and raving one minute, breaking down the next, and scooped awards for her as the woman viewers loved to hate, both at home in Australia and abroad.

When Rowena left the show after three years and was replaced by Belinda Giblin, the producers even added a Pat look-alike – another character who had been in the Rio de Janeiro clinic with Pat and who’d lost her memory and innocently taken on Pat’s identity.

Truck driver David Palmer (former Matlock Police star Tom Richards) even married this impostor before spotting the new, real (second) Pat, who was calling herself Alison Carr. As with the re-birth of dead Bobby Ewing in Dallas, viewers were happy to go along with the story. But the soap never bubbled so well again.

1985 added Abigail, the sizzling sex symbol of Australian television in the 1970s, to the cast of Sons and Daughters as Caroline Morrell – a woman scorned and after revenge, and about to make Pat the Rat look timid. Caroline was the first wife of Pat’s former husband, womaniser Stephen Morrell (Michael Long).

Despite her husband’s promiscuity, the couple had two children – Amanda (Alyce Platt) and Samantha (Sally Tayler). But deeply hurt by Stephen’s philandering, Caroline had turned into a vindictive bitch.

And so a whole new generation of soapie fans saw Abigail doing what she did best – playing the glamorous sex siren.