The huge popularity of M*A*S*H in the 70s paved the way for several spin-offs.

In the intervening years, he had mellowed and become part of the establishment he had scorned as a young man, and was now serving as Chief of Surgery at San Francisco Memorial Hospital.

In the pilot, however, he met up with a younger, wilder version of himself in Dr George Alonzo “Gonzo” Gates (Gregory Harrison), who had recently returned from three years with another M.A.S.H unit in Vietnam. 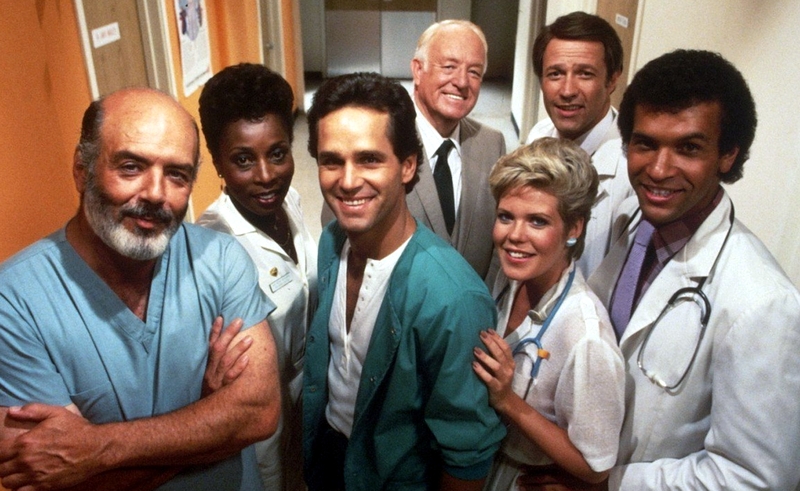 Also featured was Trapper’s scrub nurse, Clara “Starch” Willoughby (Mary McCarty), who went all the way back to his M.A.S.H days (she was replaced by Nurse Ernestine Shoop (Madge Sinclair) when actress Mary McCarty died during the hiatus between Trapper John‘s first and second seasons); sexy young nurse Gloria “Ripples” Brancusi (Christopher Norris); and Doctors Justin “Jackpot” Jackson (Brian Mitchell) and Stanley Riverside II (Charles Siebert) – the latter a likeable but officious chief of emergency services who, it was rumoured, owed his job more to his father’s position on the hospital’s board of directors than to his own skill.

Trapper also had to deal with the occasional intrusions into his life by his ex-wife, Melanie (Jessica Walter). Their son, J.T (Timothy Busfield), who had recently graduated from medical school, arrived in 1984 to do his internship at San Francisco Memorial.

Early in 1986, Gonzo suffered a stroke (Gregory Harrison was leaving the series) and, although he regained most of his faculties, was unable to return to surgery.

Trying to put his life back together and unsure that he wanted to stay in medicine if he could not be a surgeon, Gonzo left the hospital on an extended vacation with his new bride, Fran Brennan (Andrea Marcovicci), who he met when she was a patient with multiple sclerosis.

The series ran for seven seasons, from 1979 until 1986, and was popular around the world. It was an excellent mix of drama and humour, with a good group of characters and talented writers.

Except for Bonanza star Pernell Roberts, who replaced M*A*S*H actor Wayne Rogers in the title role, the cast was comprised mainly of young unknowns.

They would not remain unknown for long. Trapper John MD, would launch several of its stars into very successful careers.

Wayne Rogers was approached to reprise his role of Trapper John from M*A*S*H but turned it down, saying he did not want to play a doctor on TV again.

Oddly enough, he then went on to play another doctor in the sitcom House Calls.