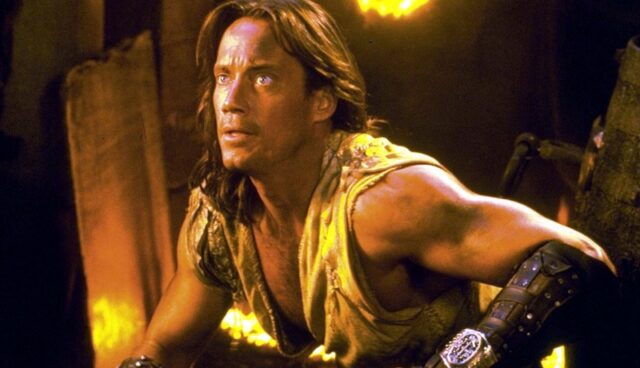 Hercules, the legendary hero of ancient Greece, is a half god (the son of the god Zeus and a mortal woman named Alcmene) who uses his mighty strength to help those the gods have turned away. He is assisted by Iolaus, his mortal friend and travelling companion.

Zeus is the King of the Gods. He rules from Mount Olympus and is married to Hera, the all-powerful Queen of the Gods.

Based on the ancient Greek myth, Zeus was unfaithful and had an affair with Alcmene, a beautiful mortal woman. The tryst resulted in a half-mortal son (Hercules) and angered Hera who frowned on infidelity and set her goal to kill Hercules, a constant reminder of Zeus’s infidelity.

When Hera (Meg Foster) attempts to kill Hercules with a fireball but misses and destroys his home, killing his wife Deianeira and his three children, Hercules begins a quest to avenge their deaths by destroying Hera.

Hera is only seen in human form in the last episode, ‘Full Circle’. She was previously only heard and usually represented by an animated pair of all-seeing eyes.

Hercules has chosen to live among mortals. Being a half god means he is also related to full gods. His half-brother, the devilishly evil Ares, the God of War, is his most troublesome relative. Ares seeks only to create havoc; Hercules despises Ares for this and risks his life to stop him and restore the peace.

Although Deianeira has been killed (her spirit lives on in the Elysian Fields), Hercules has vowed to remain faithful to her.

Hercules also assists Jason (Jeffrey Thomas) in his search for the Golden Fleece.

Iolaus (Michael Hurst) considers himself to be a great comedian (he tells jokes and is often the only one who laughs at them). He is two years older than Hercules and was a thief. It was Hercules who turned his life around.

Iolaus (pictured at left) is the son of Skouros, a professional soldier who spent little time at home and was later killed in a battle.

Although Iolaus does not possess the strength of Hercules, he often becomes offended when Hercules thinks he cannot defend himself and steps in to help.

Salmoneus (Robert Trebor) is the fast-talking toga salesman who befriends Hercules and Iolaus and involves them in his various (invariably unsuccessful) get-rich-quick schemes.

Autolycus (Bruce Campbell) is the self-proclaimed “King of Thieves”, a master cat burglar whose crimes often mean trouble for Hercules.

Aphrodite (Alexandra Tydings) is the beautiful Goddess of Love. She is very protective of her shrines and often causes trouble when her love spells backfire.

Callisto (Hudson Leick) is an evil warrior condemned to the hell of Tartarus (the underworld’s place of punishment). She is used by Hera in plans to kill Hercules.

Xena (Lucy Lawless, pictured above) is the evil and ruthless warrior princess reformed by Hercules to use her skills to help people besieged by evil. The character was spun-off into her own series, Xena: Warrior Princess.