Anton Rodgers (from Fresh Fields) starred as ageing solicitor Alec Callender, who marries a younger woman, Zoe (played by Eve Matheson until she went off to tour with the National Theatre and was replaced by Lesley Dunlop), with whom he eventually has a daughter, Fleur. 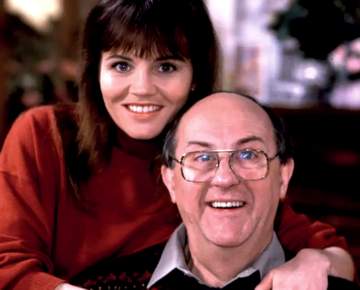 As well as scenes in the Callender household, the family firm’s office in Pinner figured prominently, where the secretarial desks were occupied by the prim Miss Vera Flood (Frances White) and the daffy ‘h’-dropping ‘ilary (Rebecca Lacey).

When Hilary left the employ of Semple, Callender and Henty for the Isle of Wight she was replaced by the Scottish but daffy Rosie MacConnachy (Ashley Jensen).

Also working at the law firm was Jamie (Paul Venables), Callender’s son from his first marriage, who eventually became a partner – at which point the name of the firm changed to Semple, Callender and Callender.

It didn’t exactly tickle the ribs, but it wasn’t particularly hateworthy either.