One of the most underrated sitcoms in the history of the medium, NewsRadio began with Dave Nelson (Dave Foley) eagerly starting his new job as news director at major New York all-news radio station WNYX, only to find out he must fire his cantankerous predecessor first.

The series never really recovered from the loss of Hartman, who was shot dead by his wife on 28 May 1998 (during the production hiatus after the fourth season). His death was addressed in the first episode of the fifth season, where his character, Bill, was revealed to have died of a sudden heart attack. 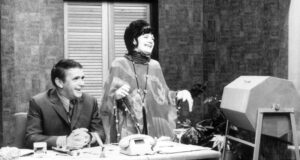 1 9 8 6 - 1 9 9 4 (UK) Set in the world of the antiques trader, Lovejoy introduced Ian McShane as the titular character - An opportunistic, charming, slightly roguish and non-conformist dealer possessed of the rare...