Born Phyllis Primrose-Peachy in Leytonstone, Essex on 26 February 1909, “Fanny” lived with her family in a house called “Apthorp” on Fairlop Road in Leytonstone.

In 1926, at the age of 17, she married her first husband, Sidney Evans. A pilot in the Royal Air Force, he was killed in a plane crash (their son, Peter was born after Sidney was killed).

Fanny sold hoovers and encyclopedias door to door for a time until she remarried in July 1928. She had a second son from this marriage, but abandoned both the son and the marriage, and went off on her own to manage a dressmaking shop.

In 1939, she married again for the third time (perhaps illegally, as there had reputedly been no divorce from the 1928 husband) but a few weeks after that marriage, she left her husband for the man she would finally stick with — Major John Whitby Cradock.

Aged 35 at the time, “Johnnie” was married himself at the time but he left his wife and children for Fanny. Fanny adopted his surname but she and Johnnie did not actually marry until 7 May 1997, even though she would insist that everyone call her “Mrs Cradock.”

Fanny and Johnnie Cradock presented a popular cookery programme on British television from the 1950s until the 1970s – starting with Kitchen Magic for the BBC and Fanny’s Kitchen for the newly launched ITV –  as well as writing several successful cookery books.

Johnnie, an alumnus of Harrow, always sported a monocle and tuxedo.

From the start, there was a great deal of sadomasochism in Fanny’s cookery. For instance, in 1956, she and Johnnie were filmed on stage at the Albert Hall where she demonstrated how to make a souffle.

The beginning of the end came in 1976 when Fanny poured scorn on a menu presented by an amateur cook called Gwen on the BBC show The Big Time.

Fanny was so scathing and condescending – and the public backlash so strong – that her career was permanently damaged and she rarely appeared on television again.

The concept of a wallet chain came from 1950s biker culture when leather and metal combined to create the fearsome image of bike gangs. Like Marlon Brando in The Wild One (1954), these bikers hit the road...

In 1972, American swimmer Mark Spitz was the new pin-up of sport. He was Hollywood tanned and looked like the perfect All-American boy. He was also one of the most competitive athletes in the world. The... 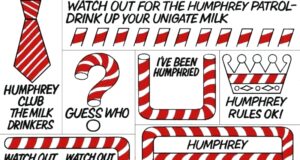 "Watch out, there's a Humphrey about" was a slogan which first hit British televisions in 1974. The Humphrey's (a product of Unigate designed to make us drink more milk during the mid 70s) were invisible creatures...

Acclaimed by many as the UK's Phil Spector, Joe Meek was born on 5 April 1929. His first love from childhood had been electronics, and this stayed with him during his stint in the Royal Air Force...

When the clothing industry tried to end the reign of that 60s icon called the mini skirt by launching the Midi in 1968, opinion polls revealed that as many as 8 out of 10 women...