Hollywood Squares is one of the most popular and longest-running daytime game shows in television history.

Much of the success of the show can be attributed to the humorous answers given by the celebrities in the nine “squares” on the board. One of the most popular celebrities was Paul Lynde, who occupied the centre square for most of the series’ initial run. 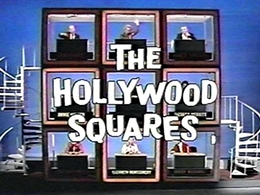 The celebrities sat in a three-storey, 17-foot-high contraption – a melange of tubular steel frame, plywood, spaghetti-like strands of lighting and sound cable, hot spotlights and assorted nuts and bolts.

The game is based on tic-tac-toe (noughts & crosses), with two opposing players required to agree or disagree with the star’s answers to questions from the host.

The celebrities either answer the host’s questions correctly or bluff their way into making the contestant believe that they know the right answer.

The first player to connect three squares in a row with an X or an O wins the game. A player winning two games becomes the champion and face a new opponent.

At the end of the show, the contestant with the highest points wins the match and is given the chance to match one celebrity for a grand prize. 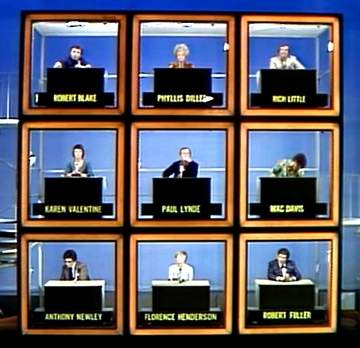 Peter Marshall was the NBC show’s original host from 1966 to 1983. Celebrities who regularly sat in the squares during those years included Paul Lynde, George Gobel, Rose Marie, Cliff Arquette (as Charley Weaver), Wally Cox, John Davidson and many others.

In 1986 when a new daytime syndicated version was produced, John Davidson became the host.

Shadoe Stevens took over the centre square in 1998, and in the late 90s actress Whoopi Goldberg acquired the rights to the series and became the regular centre square on the show (now hosted by Tom Bergeron).

In 2001, Henry Winkler (Fonzie from Happy Days) replaced Whoopi Goldberg on occasion as the centre square on the show.